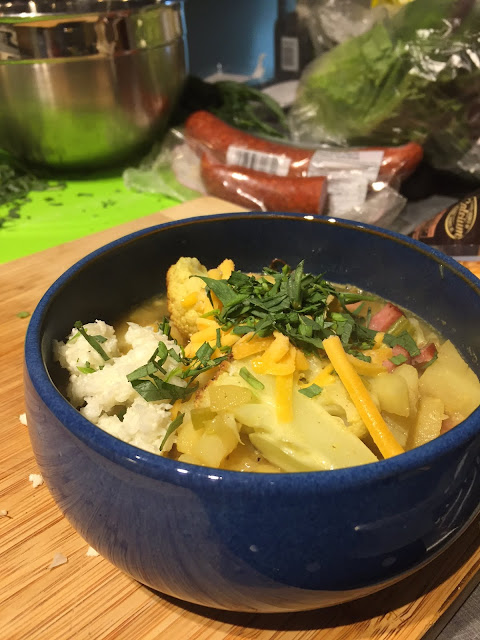 Even though we're technically making the move out of "soup season", it's hard for me to turn down a good soup, whatever the time of year. Although most cauliflower soups make a puree out of the lovely white vegetable, I tried to keep most of the cauliflower intact in this version. You're left with a good chunky soup at the end of it, what some might call a stew, but really, for me it's just semantics. It's good stuff with good broth.  Don't skimp on the garnishes for this one- although they look like an odd combination, the blend of cheese, tarragon, and the "quick pickle" really elevate the flavors. This soup also works just as well as a vegetarian option, just remove the summer sausage & you're good to go.

Divide the cauliflower in half, discarding the external green leaves. Reserve one half. With the other, roughly chop it into large segments.

Turn on the broiler to high and lightly oil a baking sheet. Put the chopped cauliflower on the baking sheet and broil until the tips turn dark brown. You don't have to rotate or stir it- just leave it to char. Take it out and keep it close by to use later.

Now, take the other half of the cauliflower, the half you reserved. Slice it in half. With one half (this would be altogether 1/4 of the whole cauliflower), grate it into a small bowl.  Mix this with the lemon juice and 1/4 teaspoon of salt. Set aside. You should have 1/4 of your original cauliflower left. Slice it into big chunks.

Put the olive oil in a large soup pot. Heat it over medium. When hot, add the onion, garlic, coriander, mustard, white pepper, and cayenne. Cook until onions are soft, about 3-4 minutes.

Add the parsnips and the celery to the pot. Stir occasionally until everything softens- again, about 3-4 minutes.

Now, add the your leftover sliced raw cauliflower and the potatoes. Let everything get settled and then add the stock. Increase the heat to medium-high, bring to a simmer and let cook until the potatoes are tender, about 15-18 minutes.

Take approximately 2 cups of soup and transfer them (carefully!) to a blender to puree (you can also do this in a separate bowl with an immersion blender if you have one). Puree until smooth and then return the puree to the big soup pot.

Taste the soup and season with salt and pepper.

Stir in the charred cauliflower and the sausage. Keep simmering until you're ready to eat.

When you're ready to eat, divide the lettuce into bowls. Ladle the soup on top of the lettuce and then top with the cheese, tarragon, and the lemony salted grated cauliflower.

Posted by Academically Malnourished at 4:17 PM