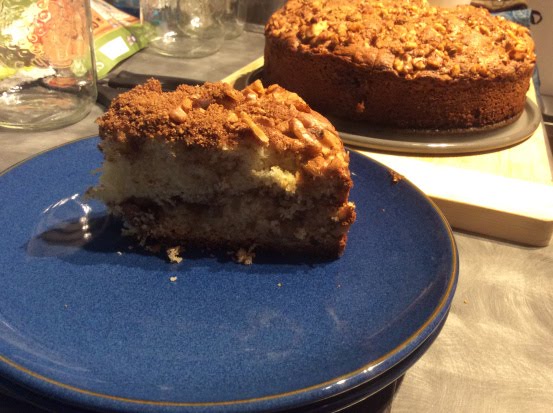 Now, I’m a firm believer in the joy of pancakes. There are few weekend-related pleasures like making hot, fluffy, buttermilk pancakes on a lazy Saturday or Sunday morning. But the breakfast food world is a wide one, ladies and gentlemen. And despite tried and true pancake pleasures, sometimes its fun to change up your weekend routine. Not that coffee cake is a newbie to the breakfast or brunch world. In my mind at least it appears permanently attached to weekends with house guests, Mother’s Days, Christmas Day mornings, you get the idea. And, of course, any meeting, no matter the subject, that took place before noon was obliged to have it on offer. You know, somewhere at the back of the room, nestled amidst the jugs of Tropicana and the carafes of moderately warm coffee. But that store bought stuff doesn’t hold a candle to the homemade variety.

Of course, it’s a bit of a misnomer to call it coffee cake, as it doesn’t contain any actual coffee. It exists as breakfast food, simply on the justification that it is cake that one serves *with* coffee. And on those weak legs alone, it achieves authentic breakfast or brunch status. Cake for breakfast. Just because someone said it went well with coffee. Amazing.


Anyway, there are about 1,001 recipes for coffee cake. Like many simple breakfast foods, almost every family has the “perfect” recipe for it, handed down over generations. Now, if my family ever had one, it has sadly been lost. But thankfully, books such as Edna Staebler’s Food that Really Schmecks, first published in the 1960s, have come to the rescue. Based on a collection of recipes from Mennonite counties in southern Ontario, the book reads like your grandmother’s cooking notes. For example: “Sometimes Mother would buy a piece of headcheese at the Kitchener Market, put it in a pot of 1/4 cup of water and let it heat till it melted and bubbled; then she’d serve it to us over boiled hot potatoes. With an endive, lettuce or dandelion salad, it was a real treat”. It’s an amazing testament to how folks used to cook and eat. This is not high dining cooking, but a much richer cultural touchstone.

Although some of her dishes don’t feature regularly in many kitchens anymore (I’m looking at you “Chellied/Jellied Chicken”), her recipes are still ironclad. So it was to her that we found inspiration for our own twist on the coffee cake- but all credit for the use of sour cream as a base ingredient must go to her. And the cake (and making it!) came out exactly as I was hoping.
Easy.
Straightforward.
Delicious.

Don’t be fooled by how easy the recipe looks & think this won't produce a delicious and moist masterpiece of morning baking. This is the coffee cake of legend.


Alternating, add the flour mixture and the sour cream mixture to the butter, sugar, eggs, and vanilla mixture. Spread half of the batter in a greased cake pan (either a 9×9 square pan or a circular springform pan).


In a bowl, combine the brown sugar, cinnamon, and nuts. Sprinkle half of this mixture over the batter. Then cover with the remaining batter and sprinkle the rest of the topping on top.


Bake for 45 minutes. Let cool in the pan for about 5 minutes before digging in.


If there’s any left, it can be wrapped in foil and reheated.

Posted by Academically Malnourished at 4:29 PM