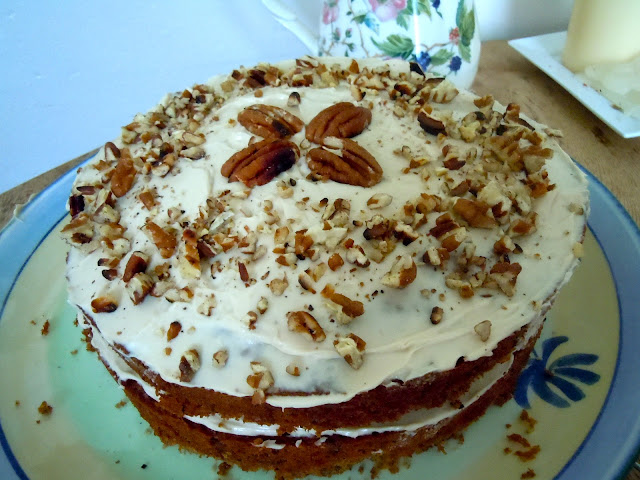 I enjoy following the Guardian series "How to cook the perfect..." because I think it's an excellent idea. Everyone has their version of classic recipes, but rarely are these variations compared and contrasted.

Is pasta or rice better in minestrone soup? Are tomatoes essential in it?
How about the perfect yorkshire puddings? Should they be massive pillowy things or small dainty puffs?

These variations are probably fought over in kitchens throughout the world, but the Guardian sets their writers to compare and contrast each, pulling out the best from each recipe they find, producing essentially the "best" of a particular well-known recipe.

And, for the most part, they've come up with some excellent "best of" recipes in the past (see my version of a blissfully tomato-free minestrone).

But obviously any "best of" recipe will ultimately rest with the chef making it. And here is where the carrot cake comes in.

I have had many carrot cakes in my time, most of them in the US. They can be wonderfully dense, moist things, full of carrot flavor and rich in nuts and raisins. Add some classic cream cheese frosting, and carrot cake can do wonders.

So I was eager to try the Guardian's version, particularly as, thanks to our weekly veg box, we are literally up to our ears in carrots. But as I read through the post, I became immediately suspicious. Not only was the tradition cream cheese frosting summarily rejected, but the amount of carrots in the cake seemed suspiciously low. Felicity Clark, the chef behind the recipe, seemed more concerned about the guilt factor associated with the carrot cake than making the cake...well, a cake (as she says: "Carrots aren't the only good thing in this cake – it's often laden with fruit and nuts too, in the manner of a sugar-laden granola bar hoping to pass muster as a health food").

Honey, you're making a cake. Not health food. Get over it.

She was also somehow insistent on making the cake with the bizarre "sandwich tins" so popular in the UK. Now, I have nothing against the classic Victoria sponge or any layered cake. But if you're going to layer a cake, give us enough frosting to make the layers worthwhile!! As you can see from the picture, there is little "extra" frosting to go around. And that, kids, is from doubling the original quantities posted on the website. Come on, Felicity, live a little. Even though she insisted that cream cheese frosting wasn't "dignified" enough for the cake (and too rich), her version of the frosting was just cream cheese and brown sugar. Ok, it was fine. But nothing like the glories of carrot cakes in the past. It seemed too guilty as a frosting, silently criticizing itself for being too fatty and apologizing that it was even there at all.
Look, if you're going to go with cake frosting, you're going to have to commit to it. Don't apologize.

This all seems to be a woefully long rant about the evils of the Guardian's carrot cake. Which may not seem entirely fair. The cake was perfectly edible (soaking the raisins in rum beforehand helped, a trick I used from "naughty Nigella" as Felicity puts it), yet not nearly "carrot-y" enough to satisfy my American palate. Ah well. Live and learn.

For the icing:
200g full-fat cream cheese
75g light brown soft sugar
Zest of ½ lemon and a squeeze of juice

Preheat the oven to 180C and grease and line the bases of 2 x 18cm sandwich tins.

Put the melted butter, sugar and eggs into a large mixing bowl and whisk well (what she actually means here is use an electric beater. Otherwise, you'll be there all day) until the ingredients are thoroughly combined and the mixture has almost doubled in volume.

Sift together the flour, bicarb, salt and spices and then fold very gently into the liquid mixture, being careful to knock as little air out as possible. Fold in the remaining ingredients and divide between the tins. Bake for about 30 minutes until a skewer inserted into the middle comes out clean. Cool in the tins.

Meanwhile, beat together the icing ingredients and refrigerate. When the cakes are cool enough to ice, remove from the tins, top one with half the icing, and then the other cake. Ice the top, and decorate with the remaining pecans.

Posted by Academically Malnourished at 10:26 AM