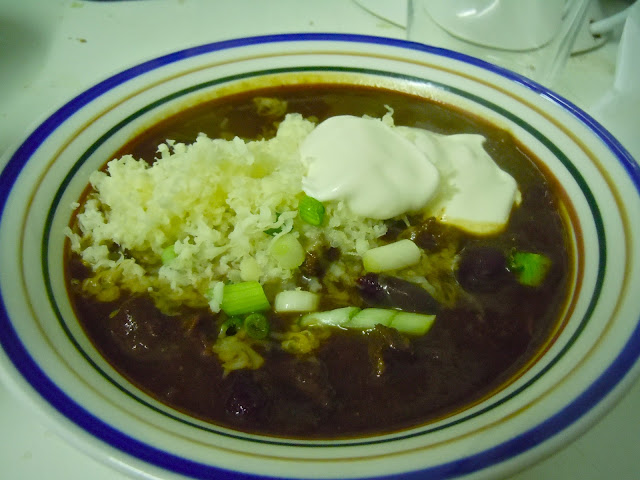 Most people I know have views about chili. Do you use beans? How spicy should it be? Are tomatoes forbidden? Do you serve it with pasta (don't ask, I don't understand people from Cincinnati either)? Or maybe over rice (clearly a British invention that defies all sense of decency)? The Texans insist that it should be without vegetables, more Northern types insist of a garden-full in their pot.
Also, what about fixins'? Sour cream? Cheese? Mango chutney (shudder)?
It seems when cooking this dish, you're liable to offend *someone*.

Now, being a Southwesterner transplanted to the British Isles, I come from a "mixed background" when it comes to chili. As my family sadly didn't have a prized recipe, handed down from generation to generation, we experimented with a number of different varieties. Indeed, the most popular chili in our house was what some would call absolute sacrilege: lean turkey mince in a rich broth of white beans and barley.
It was delicious.

But when Super Bowl came around, and I found myself the lone American in the bunch, I realized I needed to step up to the chili challenge. The aim was to cook the best darn chili around, relying on the various regional traditions of the USA. It would be a hodge-podge, sure. But, hey, America is the mixing pot, after all. It's only fair that the chili should be as well.

So I went scouring. I was intrigued by Slate's bold claims of the "best chili recipe ever" (this was not to be the last claim of this kind...not by far). It insisted that black beans, chocolate, and stout were the magic ingredients to a superb chili. I was not inclined to disagree. But then it insisted on using tempeh as the base. Whoa there, fruits and nuts. If we're going to go the chili route, we'd best make it for the non-vegetarians among us.

Then there was Epicurious' "True Texas Chili" which seemed a fair bet. I liked its use of masa harina to  bulk out the broth. But there wasn't enough "stuff" in it. Meat and sauce were good, sure. But I wanted some beans. Some tomatoes. Something to give it more texture.

And, finally, there was the inimitable Bobby Flay, another whose views on chili should be respected. His was certainly an upmarket version (with cremas and avocado relish) which seemed a bit much for a football game. But his use of spices was to be commended.

And so, I took the best from each and created something that was an American mezcla. A little bit of Stout and chocolate. A little bit of Mexican chili spice. A little bit of Texan orthodoxy. It was a full day event, but it was worth it. The end result was a thick complex stew, perfect for game day. Although I ended up backing off my original intention to add more vegetables, I think this version could certainly stand up to more; certainly bell peppers, carrots, and potatoes.

Place the chile sin a straight-sided large skillet over medium-low heat and gently toast the chiles until fragrant, 2-3 minutes per side. Don't let them burn or they'll turn bitter. Place the chiles in a bowl and cover them with very hot water and soak until soft, 15-45 minutes, turning once or twice.

Drain the chiles; split them and remove the stems and seeds (a brief rinse helps remove seeds, but don't wash away the flesh). Place the chiles in the bowl of a blend and add the cumin, black pepper, 1 tablespoon salt, and 1/4 cup water. Puree the mixture, adding more water as needed until a smooth, slightly fluid paste forms (you want to remove all but the smallest pieces of skin). Set the chile paste aside.

Return skillet to medium-high heat and melt 2 tablespoons of the lard. When it begins to smoke, swirl skillet to coat and add half of the beef. Lightly brown on at least two sides, about 3 minutes per side, reducing the heat if the meat threatens to burn. Transfer to a bowl and repeat with 2 more tablespoons of lard and the remaining beef. Reserve.

Let the skillet cool slightly, and place it over medium-low heat. Melt the remaining 1 tablespoon of lard in the skillet; add the onion and garlic and cook gently for 3 to 4 minutes, stirring occasionally. Add the stock, the remaining 2 cups water and gradually whisk in the masa harina to avoid lumps. Stir in the reserved chile paste, scraping the bottom of the skillet with a spatula to loosen any browned bits. Add the kidney beans, black beans, stout, tomatoes, epazote/oregano. Add the reserved beef (and any juices in the bowl) and bring to a simmer over high heat. Reduce heat to maintain the barest possible simmer (just a few bubbles breaking the surface) and cook, stirring occasionally, until the meat is tender but still somewhat firm and 1 1/2 to 2 cups of thickened but still liquid sauce surrounds the cubes of meat, about 2 hours.

Stir in the brown sugar, chocolate, and vinegar thoroughly and add more salt to taste; gently simmer 10 minutes more. At this point, it may look like there is excess sauce. Turn off the heat and let the chili stand for at least 30 minutes, during which time the meat will absorb about half of the remaining sauce in the skillet, leaving the meat bathed in a thick, somewhat fluid sauce. Stir in additional broth or water if the mixture seems too dry. If the mixture seems a bit loose and wet, allow it to simmer a bit more. Adjust the balance of flavors with a bit of additional salt, sugar, or vinegar, if you like.

Posted by Academically Malnourished at 6:34 PM