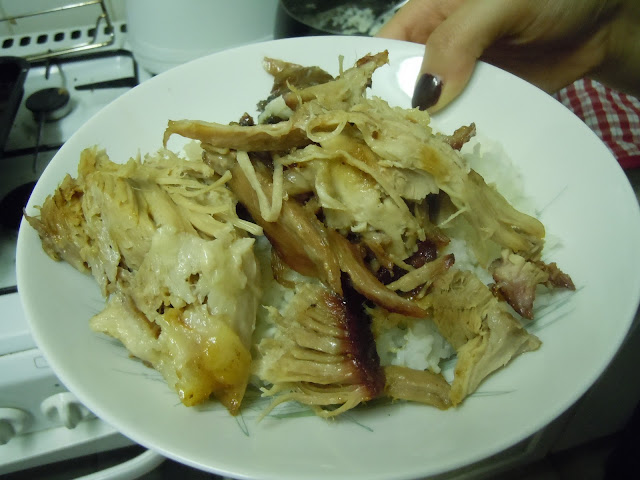 Pork and coffee are perhaps the *only* two reasons to find oneself not only conscious but outside in 20 degree weather (Fahrenheit, not Celsius) at 7:20 in the morning. And it better be good pork. The coffee is, well, just a necessity of life.

But the pig was going to be good. The recipe came from the revered chef, David Chang, of New York's Momofuku fame. The man knows his pig. And this recipe is a pork-lover's dream.

But dreams take work. Lots of work. "Getting up early so the stupid pig can marinate properly" work.

So that's how I found myself at the butcher's at a horrifically early hour to purchase what David Chang (and apparently the rest of America)  interestingly calls "pork butt" or "picnic ham". Well, try saying that to a British butcher and not getting laughed out of the store. A quick perusal of the web gave me the right vocab to attack the situation. Ah...Boston butt! That'll explain everything!
Lies.
At least the web let me know what part of the piggy I was actually ordering, which as it happened, was the shoulder. That solved all problems.
So FYI, chefs, if ordering from a butcher in the UK, you want bone-in pork shoulder for this recipe.

But this was just step one of a full day pork-lover's marathon. The pig had to marinate in a crust of salt and sugary goodness for 6 hours. It had to be slowly roasted for another 6 after that. And then, as the piece de resistance, it had to be practically incinerated for 15 minutes to get that fabulously crackly sugary skin that everyone loves so much. Needless to say, this was going to take some time. And that doesn't even mention the sauces. Not one, but two sauces. Hey, this recipe is all about time investment.

But thankfully the sauces take little to no time to put together while the pig is roasting away. Apart from mincing 1/2 cup of ginger (which takes just as long as you think) and slicing some scallions/spring onions, it's a fairly quick job.

So piggy and I spent the day together. But there was no way I was eating piggy alone. This is a recipe for a veritable army. It serves *at least* six people, so start calling up friends, neighbors, and hey, people you find on the street. But guard that beautiful crackling skin wisely. Everyone knows it's the best part and you'll have to fight long and hard to keep some for yourself once they try it.

Serve the bad boy on top of plain white rice and set the condiments out for people to taste and try as they see fit. Of course, the pig was delicious on its own, but I have to hand it David Chang, the sauces made it even better.

1 whole bone-in pork butt, picnic ham, or pork shoulder (depending on your geography) approx. 8 to 10 pounds or 4-4.5 kilograms

Place the pork in a large, shallow bowl or roasting pan. Mix the white sugar and 1 cup of the salt together in another bowl, then rub the mixture all over the meat. Cover it with plastic wrap and place in the refrigerator for at least 6 hours (or, if your fridge is full and there happens to be a wintery tundra outside, wrap that puppy well and stick it outside), or overnight.

When you’re ready to cook, heat oven to 300. Remove pork from refrigerator and discard any juices. Place the pork in a roasting pan and set in the oven and cook for approximately 6 hours, or until it collapses, yielding easily to the tines of a fork. (After the first hour, baste hourly with pan juices.) At this point, you may remove the meat from the oven and allow it to rest for up to an hour.


Make your sauces and prepare 2 cups of white rice (see recipes below) and kimchi if desired. When your accompaniments are prepared and you are ready to serve the food, turn oven to 500. In a small bowl, stir together the remaining tablespoon of salt with the brown sugar. Rub this mixture all over the cooked pork.

Place in oven for approximately 10 to 15 minutes, or until a dark caramel crust has developed on the meat. Serve hot, with the accompaniments.

½ teaspoon kosher salt, or to taste 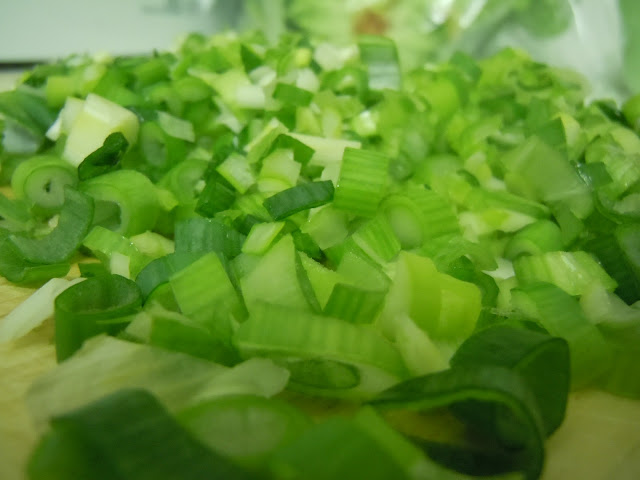 *Chef's note: The 2 main ingredients to the sauce requires a bit of searching in Asian markets. The ones I found come in tubs with fairly general descriptions such as "Red pepper paste" for kochujang. As always, it's best to ask just to make sure you're buying the right item!

Kimchi (available in many Asian markets, and online)

To make the ginger-scallion sauce: In a large bowl, combine the scallions with the rest of the ingredients. Mix well and taste, adding salt if needed.

To make the ssam sauce: In a medium bowl, combine the chili pastes with the vinegar and oil, and mix well.

Prepare rice and put kimchi and sauces into serving bowls.

Posted by Academically Malnourished at 5:36 AM