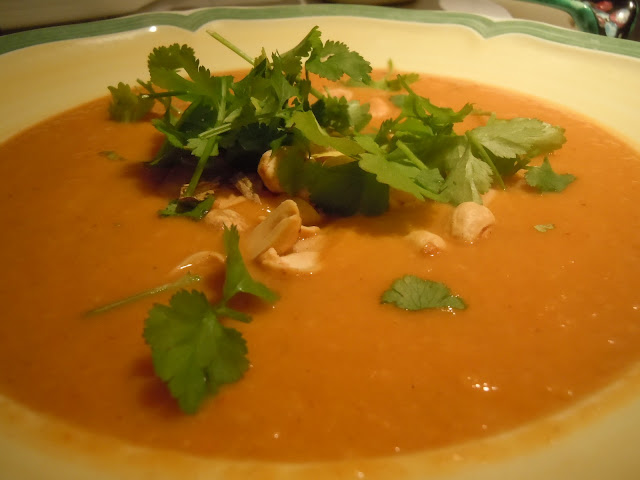 This recipe originally made its debut during the 2011 Turducken Extravaganza (about which, more later). We were in desperate need of a sweet potato recipe, but I was unwilling to do the same-old sweet potato casserole, complete with brown sugar or marshmallows. Now, don't get me wrong, I love sweet potato casserole, but with the thousands of courses and pot luck dishes we had that night, the casserole would have been lost in the shuffle. So we needed a new way to put the traditional ingredient in the Thanksgiving dinner.

And soup was the perfect answer. It started off the meal with a non-traditional punch (there's a great smokiness to this recipe. Not hot, but a nice warmth) and it let everyone in the room know we meant business. And it was gobbled up. Literally. The soup went in about 5 minutes flat, an indication of a crowd pleaser if ever there was one.

Now, I prefer this soup with a nice hearty garnish of cilantro/coriander, but I know how some people feel about the stuff. Taking that into consideration, the soup does just fine with a garnish of peanuts, giving it a great texture.

Also, don't worry if you can't find unsalted dry roasted peanuts. The first time I made this recipe, I searched high and low for them in vain. I eventually relented and bought some salted peanuts, fearing that my soup would resemble a salt lick. But never fear! As long as you decrease the salt you add alongside the vegetables when cooking, your soup should remain thankfully un-salt licked.


Method
Heat the oil in a large saucepan over medium-high heat. Saute the onion 10 minutes, until lightly browned. Mix in the garlic, ginger, cumin, coriander, cinnamon, and cloves. Stir in the tomatoes, sweet potatoes, and carrot, and continue to cook and stir about 5 minutes.

Pour water into the saucepan, and season the mixture with salt. Bring to a boil, reduce heat, and simmer 30 minutes.

Remove the soup mixture from heat. In a food processor or blender, blend the soup and peanuts until almost smooth. Season with cayenne pepper. Return to the saucepan. Whisk in the peanut butter, and cook until heated through.

Serve warm topped with fresh cilantro and some chopped peanuts.

Posted by Academically Malnourished at 3:33 PM