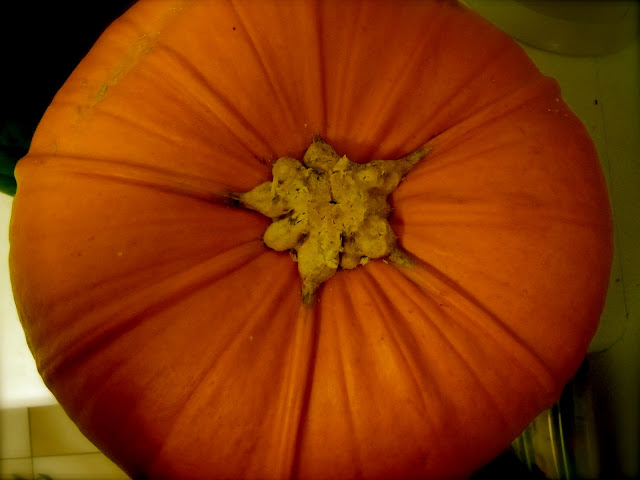 Behold, the mighty pumpkin. Well, surprisingly, not that mighty in the land of the Brits. Despite the hordes of pumpkins and pumpkin-flavored items in the US, alas, the UK (as I have waxed lyrically about previously) seems to shirk the glories of this gourd.

Although pumpkin soup is not completely unknown on this side of the Atlantic, versions seem to promote the standard "peel, cube, and cook" varieties. Now, I don't know if you've ever tried to peel a pumpkin, but there are few less rewarding tasks in this world. And a task guaranteed to either cause significant harm to you and/or your pumpkin, probably leaving you with little desire to carry on in the soup-making task.

Which is why *this* version of pumpkin soup is so glorious. No peeling required! Just the standard jack-o-lantern trick of cutting a lid on the top and scooping out the glorious pumpkin seeds (to be toasted later). Baking the entire pumpkin also makes a great display for the table (Martha Stewart eat your heart out) and you also get to live dangerously: Will the pumpkin collapse in the oven? Won't it? Yes, the soup takes a bit of patience, but the combination of Thai and autumnal flavors in this thing are completely worth it. Originally this soup (in a much simpler yet absolutely still delicious form) was found via River Cottage and basically involves cooking a bunch of cream and cheese in a hollowed pumpkin. My version makes the concoction a bit more soup-like with some complex Asian flavors and some mushrooms thrown in for earthiness. It's a soup that's a bit time-consuming but wonderful on those cold autumn nights.

Using a narrow pointed knife, slice around the stem of the pumpkin at a 45-degree angle. Scoop out pulp and seeds (but don't forget to keep the seeds for toasting!). Place the emptied pumpkin on a large baking tray that has been covered with aluminum foil.

Fill the pumpkin with half of the grated Gruyère cheese.

Meanwhile, heat a deep saucepan on med-high and add the olive oil. When hot, add the onion and garlic and saute for approximately 3-5 minutes. Add the rehydrated porcini mushrooms, chestnut mushrooms, and chilies. Cook for another 3-5 minutes, or until the mushrooms go soft and start to sweat. Add the bacon and cook for another 30 seconds to a minute.

At this point, add the porcini mushroom water or chicken broth along with the coconut milk. Stir. Add in gently, while stirring, the 1/2 cup of single cream and cook for another 2-3 minutes. Season to taste with salt as well as the black and white pepper.

Replace the lid of the pumpkin and place the entire thing in the oven to be roasted slowly. Depending on the size of your pumpkin, this may range anywhere from 1 to 2 1/2 hours. The key to cooking the pumpkin is to keep a wary eye on its structural integrity. Once the skin on the outside of the pumpkin starts to sag, be warned! There is a fine line between the glories of a cooked pumpkin and a heap of mush inside your oven. If in doubt, remove the pumpkin from the oven, remove the lid, and check for the done-ness of the inside flesh (should be fairly soft). 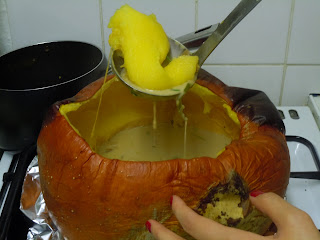 When serving, make sure to scrape the inside of the pumpkin so that each bowl gets a good portion of the flesh and cheesy goodness (which by now has melted into the pumpkin itself) alongside the soup. Serve with cilantro and/or sliced green onions on top as garnish. 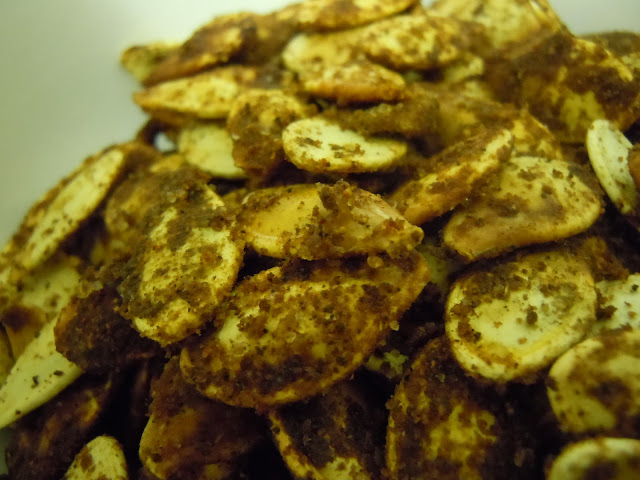 A fall classic and a great snack and/or soup topper!!

After removing the seeds from the pumpkin, rinse with water, and remove any strings and bits of squash. Pat dry, and place in a small bowl.

Add the cayenne, cinnamon, achiote, and cumin to the bowl and stir to coat.

Scatter the seeds on a sheet pan in a single layer and drizzle with olive oil. Sprinkle with salt and pepper and toss to coat. Bake for 7 minutes and stir. Bake for another 7 minutes (or until seeds start to look dry and crispy).
Posted by Academically Malnourished at 4:17 AM