Fried Chickpeas with Chorizo and Kale 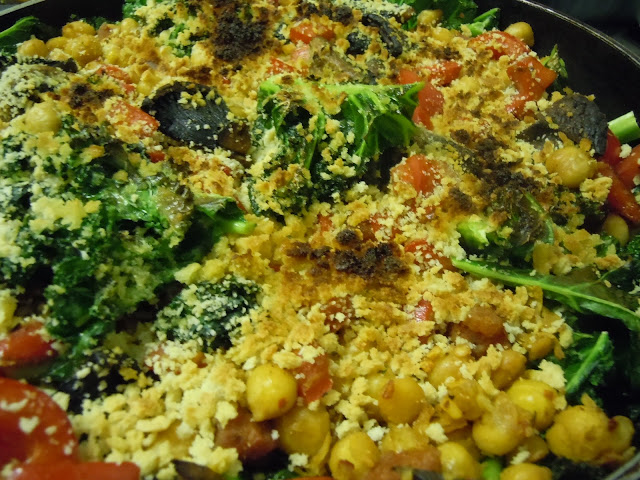 This is the best kind of "weeknight dinner" recipe. It's fast, simple, and perhaps the tastiest thing in the world. It also is phenomenal because it also technically could count as a "one pot" dish. Although I'm not sure Bittman would classify it as a main course, I've always thought of it as one. Basically because it's so delicious I never want anything else.

Although Bittman technically calls for spinach with this recipe, I prefer kale. It's texture is a bit richer and it fries up wonderfully under the broiler, giving it the perfect toasted crispness to go with the chorizo and chickpeas.

Also, for this recipe, the use of Spanish chorizo is a must. Any other sausage doesn't have the rich pepperiness of the Spanish variety and the simplicity of the dish requires a bit more of a kick from the meat. If you want to up the tastiness/smokiness factor even more, I recommend adding even more paprika (and perhaps even some cayenne) to the chickpeas as they're frying in the oil. It boosts the flavor wonderfully.


Serves about four as a main course

2 cups cooked or canned chickpeas, as dry as possible

Method
Heat the broiler or grill.

Put three tablespoons of the oil in a skillet large enough to hold chickpeas in one layer over medium-high heat. When it’s hot, add chickpeas and sprinkle with salt and pepper and the paprika.

Reduce heat to medium-low and cook, shaking the pan occasionally, until chickpeas begin to brown, about 10 minutes, then add chorizo. Continue cooking for another 5 to 8 minutes or until chickpeas are crisp; use a slotted spoon to remove chickpeas and chorizo from pan and set aside.

Add the remainder of the 1/4 cup of oil to the pan; when it’s hot, add spinach and sherry, sprinkle with salt and pepper, and cook spinach over medium-low heat until very soft and the liquid has evaporated. Add chickpeas and chorizo back to the pan and toss quickly to combine; top with bread crumbs, drizzle with a bit more oil and run pan under the broiler to lightly brown the top.

Serve hot or at room temperature. 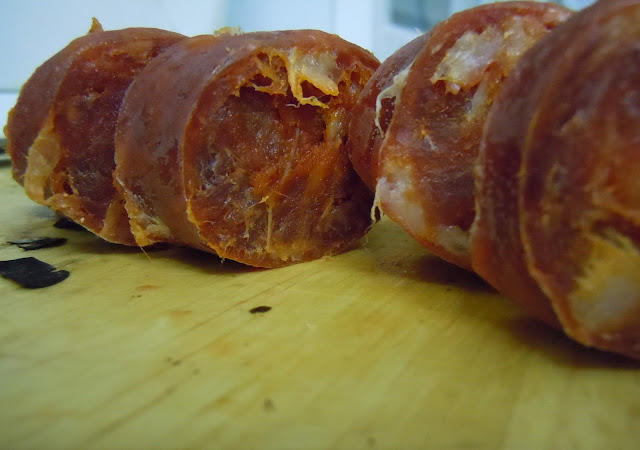 Posted by Academically Malnourished at 5:50 PM