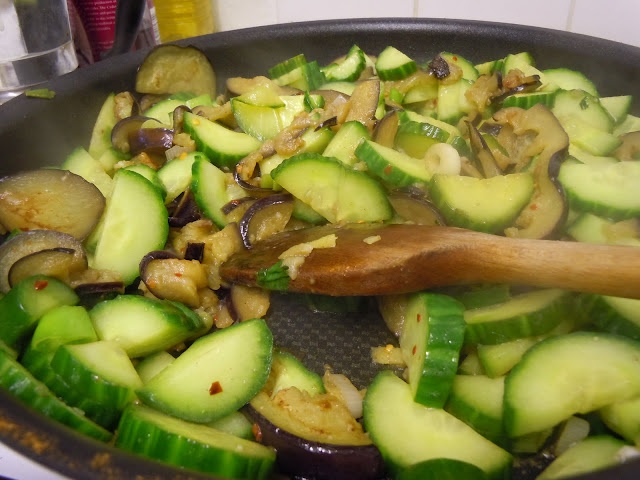 I admit it. Stir-fries can be boring. Oil. Vegetables. Some protein. Cook. My life as a college student was defined by this simple recipe. It was easy, fast, and relatively healthy. After about 1000 of these dinners, and after I had done all the permutations of veg + meat I could think of, I abandoned the stir-fry, thinking I had moved on to much grander, more sophisticated meals.

How silly. Stir fries can be amazing. You just have to think a little creatively. And you have to know how to manipulate your herbs and spices. But really, they can be just as complex and "grand" as anything else on offer.

Now, cucumber may not be the most obvious vegetable for stir-fries, but it works beautifully. If cooked just long enough, it retains just a bit of a firm crunch, but soaks up flavors and spice beautifully. And eggplant? Well, anything that has it usually gets my thumbs-up. This was no different. After just a few minutes in the pan, it'll soften into that wonderful silky texture, absolutely more-ish.

This dish probably works best as a side; however, I turned mine into a main (and it probably could have benefited from some tofu or shrimp to bulk it out as such). Feel free to experiment with the flavors on this one; you can't go wrong with boosting the ginger or spice content.

Serves four as a side dish

Method
1. Trim off the ends of the eggplants. Cut in half lengthwise, then slice thin (about 1/4 inch). Lightly salt, and toss in a colander. Allow to sit for 15 minutes while you prepare the other ingredients. Squeeze out excess water, then dry between sheets of paper towel.

2. Meanwhile, trim off the ends of the cucumbers. Cut in half lengthwise, then slice on the diagonal into 1/4-inch thick slices.

3. Combine the rice vinegar, soy sauce, sugar, salt and sesame oil in a small bowl. Place all of the ingredients near your wok or frying pan.

4. Heat a 14-inch flat-bottomed wok or 12-inch steel skillet over high heat until a drop of water evaporates within a second or two from the surface of the pan. Add the peanut or canola oil to the sides of the pan and tilt the pan to distribute. Add the eggplant. Stir-fry for three to four minutes until cooked through. Add the ginger and red pepper flakes, and stir-fry for 30 seconds. Add the cucumbers and scallions or chives. Stir-fry 30 seconds. Add the soy sauce mixture to the wok, and stir-fry one minute until the cucumber just begins to wilt. Remove from the heat and serve. 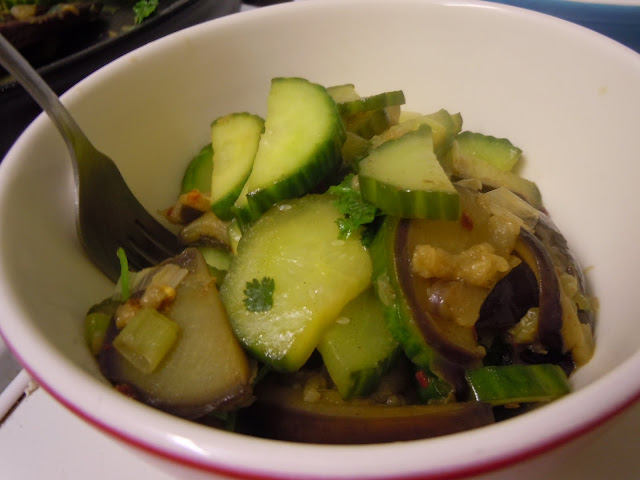 Posted by Academically Malnourished at 4:42 AM