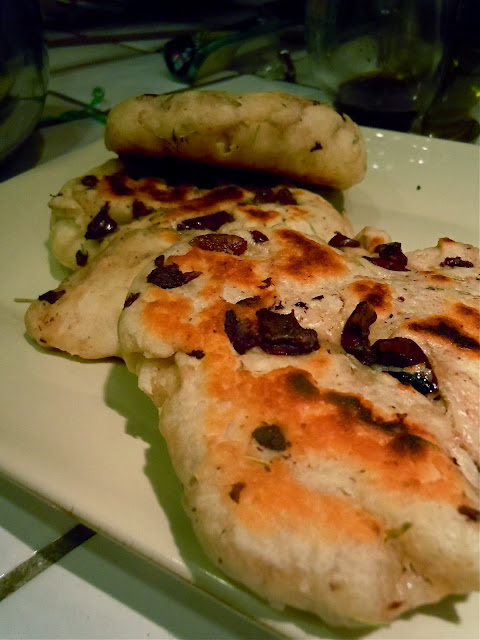 I've already waxed lyrical on the glories of flatbread. The speed! The convenience! The deliciousness!

Well, if previous posts hadn't convinced you, let me add another piece of evidence to the argument.
Behold: the awkwardly-titled "Olive oil, salt, and rosemary flatbread".

This masterpiece is another inspiration from Mr. Bittman in his How to Cook Everything, Vegetarian.

Although, to be honest, this recipe had me worried. Sure, he said it was easy as pie. Sure, this recipe allows for infinite combinations (this one just happens to be my favorite). But I was worried about the plague that haunts the seemingly failproof method of flatbread. Tough dough. Unlike yeast bread, which you can knead and manhandle (up to a point), the doughiness of the flatbread (just flour and baking powder) lends itself far more quickly to toughness if it's over-handled.

Now, I had been as gentle as I thought appropriate, but when pulling pieces apart to be thrown on the pan, there were the seemingly tell-tale signs of toughness. They were thick. Apparently too dense.
Had I lost the charmed flatbread ways?

I had doubted in vain. Despite the seemingly touch texture in the pan, as soon as I was able to tentatively tear into a piece, the same soft and chewy warmth was a welcome sight/taste. And so, I offer yet another example of why yeast breads are horribly over-rated. Seriously, try these. You'll thank me.

NB: This recipe (as mentioned above) is merely one of a thousand possible combinations. I added rosemary and olives to the mix, but for the basics all you need is the olive oil, four, baking powder, and salt. All other ingredients are completely up to you. Bittman recommends adding spice blends, pesto, chiles, cheese, minced herbs, sauteed onions, dried fruit, basically anything you want. The choices are endless. Did I mention how awesome flatbread was? Oh, I did. Ok.

Method
Combine the flour, baking powder, and salt in a medium bowl. Add the 1/3 cup olive oil and then most of 1 cup of warm water.

Mix until the dough begins to come together. Knead in the bowl for 30 seconds. The dough should be in a well-defined, barely sticky, easy to handle ball.
If it is too dry, add water 1 tablespoon at a time. If it is too wet, which is unlikely, add a tablespoon or two of flour.

Heat a griddle or set a heavy pan over medium heat. Have extra olive oil handy for greasing.

Divide the dough into 8 to 12 pieces and pat them into patties between your hands until they're about 1/2 inch thick. When the griddle/pan is hot, use enough olive oil to film the bottom and put in as many breads as will fit comfortably without crowding.

Cook undisturbed, until they begin to brown around the edges and they begin to puff up, about 3-5 minutes. Turn and cook the other side, until crisp and golden.
Posted by Academically Malnourished at 9:21 PM