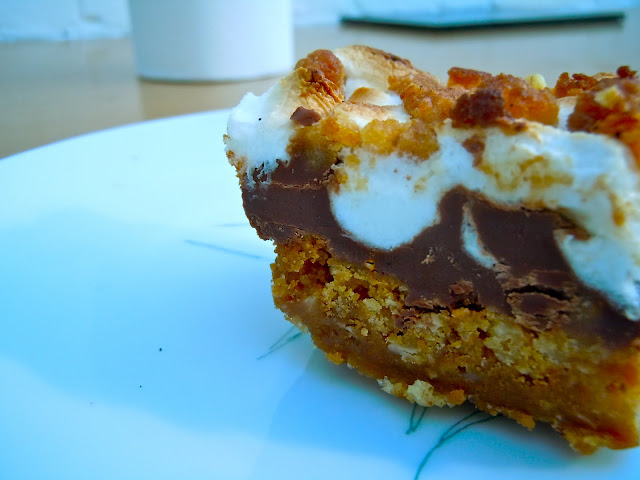 Oh s'mores. Simple yet enduringly delicious. And, surprisingly perhaps, quintessentially American. I attribute this to the lack of the campfire concept in Britain. Although I haven't been camping here myself, I have had enough North American friends go off packing into the wilds of Cornwall or Somerset to come back and bemoan the lack of a proper campfire. Apparently it's just "not done" in England. Tis a shame. For without campfires there cannot be a proper s'more experience.

But it's not just the campfire. Not really. No, this country will never appreciate the s'more until graham crackers are accepted here. Because honestly, when a recipe (if you can even call the directions for s'mores that) calls for only three ingredients, you'd better have all three. I don't care what they say about using biscuits (the British kind, mind you), tea cakes, cookies, what have you. There is something strangely unique about the graham cracker. And its presence (or lack thereof) will make or break any good s'more recipe.

I miss s'mores, sure. But I hadn't thought about them in years. Not until a recently published article on Slate talked about the wonders of cooking shows and their potential to get you to, well, cook. Now, I haven't seen the show which this recipe comes from (Ann Thornton, we salute you) but this recipe is living proof that not just shows can get you to cook, articles about cooking shows can get you to cook equally as well (ok, well, maybe I'm a captive audience, but still). As soon as the article mentioned something about s'mores bars with chipotle chile, there was no going back. As the article said: I had to make them.

But alas. I am in a graham-cracker free country. The fact that usually suppresses any lingering urge in me to make s'mores. But no. This was too delicious-looking a recipe to pass up. I would press on. And so I found myself trawling the biscuit aisle of Tesco, vainly in search of something that resembled the quintessential American graham cracker. In the end, I decided on a mixture of butter and ginger biscuits. Yes, yes, I know. Twas not a graham cracker. Biscuits are too sugary- too full of butter. They don't have the glorious thin "crispness" of the graham cracker. But desperate times, people. Desperate times.

And did I mention these things are ABSOLUTELY DELICIOUS? Oh goodness. You can't get enough of them. They feature the same magical simple goodness as original s'mores, the kind that leaves you wondering how just a few ingredients can turn into utter bliss. These things are dangerous, I warn you now.

Made even more so by the fact that the recipe is simple as pie. Despite lack of graham, the biscuit base did just as well (I mean, honestly, they're biscuits. They were not going to taste horrible). True, it was not the original s'more all Americans know and love, but these bars are so more-ish (to use a British phrase) anyway that you forgive them their shortcomings. True s'mores will have to wait for American soil, but in the meantime, these will do quite nicely.


Directions
Preheat the oven to 350 degrees F (or approximately 175 C).

Line the bottom and sides of a 9 by 13-inch baking pan with foil. You want to leave about 4 inches of overhang on the 2 opposite sides. These are going to be your handles to remove the bars from the pan in 1 piece, so make sure that there is enough of the overhang for you to have a solid grip. Grease the foil well with the softened butter.

In your food processor (or in a plastic bag), grind the graham crackers into a fine meal (you need 2 cups). In a large bowl, combine your crumbs with the sugar, sea salt and melted butter. The mixture should look and feel like wet sand. Set aside a heaping 1/2 cup of the crumb mixture for the topping. Evenly press the remaining crumb mixture into the bottom the foil-lined pan. Pop your crust into the oven and bake until it is golden brown and your kitchen smells of graham crackers, 12 to 15 minutes. Remove the crust from the oven and allow it to cool on a rack or on a dishtowel on your counter.

Melt the milk chocolate in a saucepan over low heat, stirring continuously until fully melted. Do not turn up the heat to hurry this process, you must keep it on low. Alternately, you can microwave the chocolate on low power, stirring after 2 minutes. Once the chocolate is fully melted, it's time to add various chile powders, if using, and stir it in completely.

Refrigerate the bars until the chocolate is hard, 2 hours or so. Grab the ends of the foil liner and lift the bars out of the pan in 1 piece. Move to a cutting board and cut into 24 squares. And if you have a particularly crafty roommate, you can include a single strawberry to add a note of healthy fruit to the dish (and to the photo). 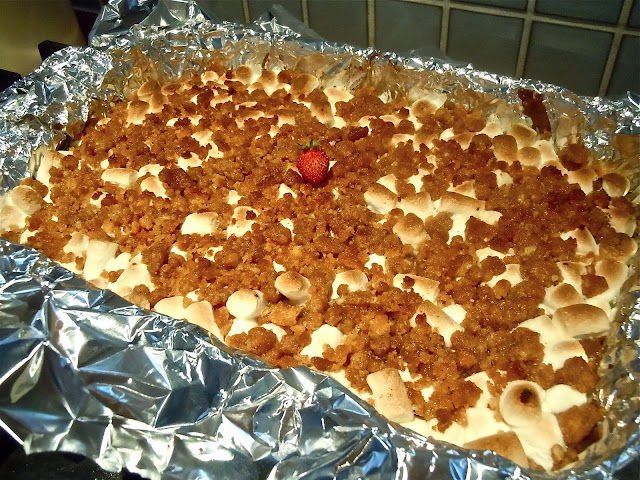 Posted by Academically Malnourished at 3:06 AM