Spinach and Asparagus Pasta with Chorizo 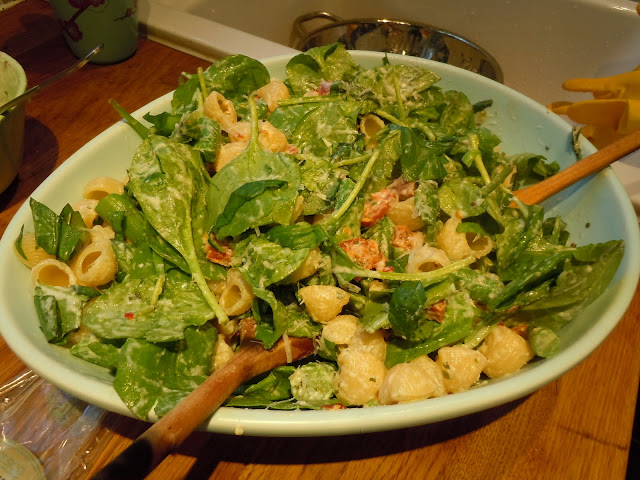 Do you ever have one of those moments where something comes out nothing at all like you planned?
Yeah. Me too.

This dish, in fact, is the result of one of those moments.

Now, nominally, this was supposed to be "Lasagna with Asparagus and Chives", based on the latest Martha Schulman entry on the New York Times.

But, as you'll probably notice in the picture above, there's a stunning lack of lasagna noodles. And also chives. Trust me. Chives feature nowhere in the above picture.

You see, I'm not usually a lasagna person. It's usually way too dense and rich and overwhelming (and usually with way too much tomato sauce, but let's not open that particular can of worms at the moment). But when I saw this version, I thought "This is a lasagna I can get behind". It looked light and summery with not too much sauce (no tomatoes in sight! Just a nice light ricotta) and perfect for a Sunday dinner. This plan was made all the better as I even had (or at least thought I had) lasagna noodles already in my cupboard.

So off I trundled to Tesco, picking up the few things the recipe called for. Asparagus? Check. Basil? Why not? Ricotta? Sure! Why not throw in some spinach, just to be fun and daring? Chives? Well, alas, Tesco was out of chives, but as I had already collected my basil, I thought its absence surely wouldn't hurt anything. And that was all. I proudly walked right past the pasta section, confident in my well-stocked cupboard.

Well, I'm sure you can see where this is heading. To my surprise (and dismay), as I rooted around in my seemingly-lasagnaless pantry, I remembered I had thrown out my noodles some months back when an ant colony had decided to take up residence in our kitchen. While thankfully the ants were now gone, unfortunately so too were my lasagna noodles. Which, it seemed, were basic prerequisites for a lasagna.

No matter. I had other types of pasta. It would serve. And it did! Actually, the whole dish worked out quite well. The ricotta sauce as advocated by Martha Schulman served just as well on non-lasagna noodles (as one would expect) and combined with shredded basil, raw spinach, and some chorizo thrown in for good measure, it was a dish that was surprisingly more-ish.

So thus, while I can claim inspiration by the inimitable Recipes for Health, I have to call this recipe an original.

1/2 tsp each of red pepper flakes, oregano, thyme, and rosemary

Bring a large pot of water to a rolling boil, salt generously and add the asparagus. Meanwhile, fill a bowl with cold water. Boil thin stalks for three minutes, thicker stalks for four to six minutes until tender. Using tongs, remove the asparagus from the pot and transfer to the bowl of cold water. Drain and cut on the diagonal into 3/4-inch lengths.

Add the pasta to the boiling water, and boil until cooked al dente -- firm to the bite. Meanwhile, in a small bowl, combine the ricotta with the oil, garlic, and spices. When the noodles are done, remove 1/2 cup of the pasta water, and add to the bowl with the ricotta. Mix together well. In a large bowl, add the spinach and the asparagus, basil and Parmesan or pecorino to the bowl. Mix the ricotta mixture into the spinach and asparagus. Drain the lasagna, and toss with everything. Serve at once.

Posted by Academically Malnourished at 4:34 PM