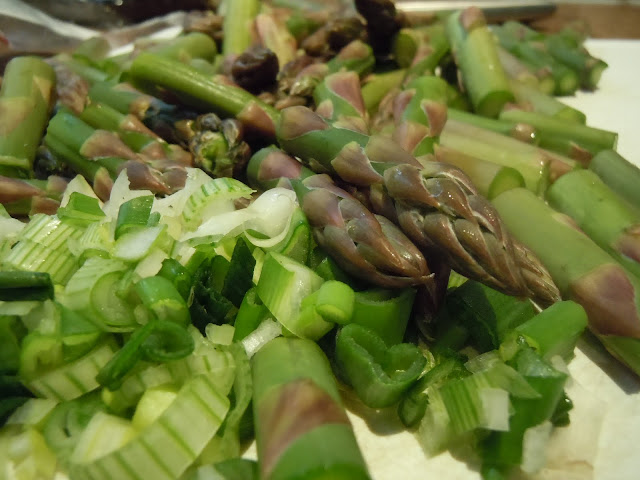 It took me some time to get on the asparagus bandwagon. In Arizona, where seasons are practically non-existent (unless you count hot and, well, hotter), one doesn't grow up with the amazing produce which summer is associated with in most of the rest of the world.
While our plants and trees withered and died in the ever-increasing temperatures of May, June, and July, the rest of the world was feasting on summer produce. So I never realized just how thankful you can be, after the dregs of winter (what, another butternut squash dish?), that you now have an entirely different and varied repertoire of vegetables to play with in terms of cooking.

And thus, asparagus. The summer vegetable loathed by children the world over. I was no different. They looked like trees and if you overcooked them, well, they were a mushy mess. No. Thank. You.

But, done right, they're amazing. I mean, really amazing. And paired with eggs? Game over. I'm not sure what it is about the two that make them perfect for each other, but you can literally put almost any egg dish with a properly roasted asparagus or two, and you have perfection on a plate. Trust me, the NY Times devoted an entire article to it. It's that good.

And thus I present skillet-baked asparagus and eggs. If I hadn't sold this meal enough on just the virtues of asparagus and eggs alone, this is also a one pot dish. Roast asparagus. Add eggs (and a touch of cream). Stick in oven. Eat. Simple as pie. 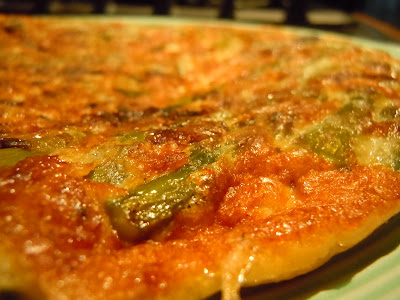 Heat the oven to 300 degrees. In a large skillet over medium heat, warm the olive oil until shimmering. Add the asparagus and the scallions and cook for 5 minutes, stirring occasionally, until asparagus is browned and tender.

Whisk together the eggs, 4 tablespoons of the herbs, and cream. Whisk in Parmesan, salt and pepper. Pour the egg mixture over asparagus and place the skillet in the oven.

Bake for about 17- 20 minutes, until set, but still slightly jiggly in the center. Cool in the pan for about 10 minutes before serving. It is best warm, not hot.

Squeeze one or two lemon wedges over it, drizzle with olive oil, and sprinkle with flaky sea salt and remaining herbs. Cut into wedges.