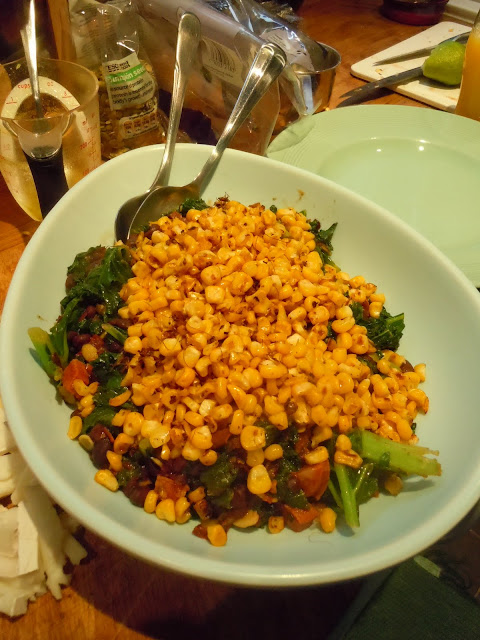 I have no idea why this recipe is so tasty. No clue. I actually debated about making it, after looking at its ingredients. I thought, "Sure, it's healthy, but will it taste like anything?"

Strangely enough, my mother used to make a version of this (based on a Rick Bayless recipe, may the Mexican gods forever shine upon him) with Mexican chorizo and my family used to gulp it down in buckets. No corn in that one, but the essential beans and kale stewed in a broth were the same. I had completely forgotten about the recipe (as Mexican chorizo is impossible to get here), but I recently made the discovery of the Whole Foods recipe section on its website, and it looked, well, like excellent inspiration for healthy side dish. But such a delicious one? Never in my dreams.

Seriously. You won't believe me until you make this. Make it. Try it. It's wonderful.

1 bag kale or swiss chard (if using chard, cut into medium pieces, separating the stems from the leaves)

1/3 cup low-sodium chicken or vegetable broth, plus more as needed

Heat a large heavy skillet over medium-high heat until very hot. Add corn kernels and cook, shaking the pan and stirring, until the kernels brown, about 5 minutes. Remove corn from the skillet and set aside.

Rinse the pan to remove any browned corn from the bottom. Return the skillet to medium heat and add broth, garlic and pepper flakes.

Add chard stems (if using) and simmer until just tender, about 2 minutes. Add chard leaves (or kale) and stir until they begin to wilt and all fit in the skillet.

Cover and cook until the kale/chard is very tender, about 5 minutes; add more broth a tablespoon at a time if it gets dry. Uncover the skillet and stir in beans, chorizo, chiles, vinegar and pumpkin seeds.

Cook for 2 more minutes. Transfer the kale/chard mixture to a platter and sprinkle with the toasted corn.

Posted by Academically Malnourished at 7:45 PM