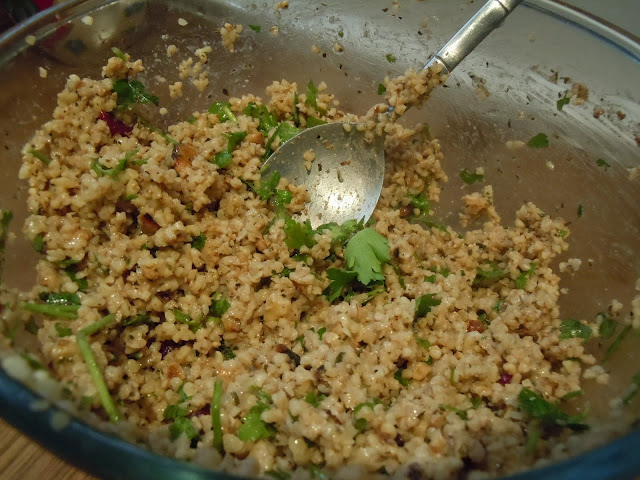 Alternative grains. It basically breathes the word "hippie". But they've become the latest bandwagon to jump on, culinarily speaking. Quinoa, bulgur, couscous, farro, wheat berries (seriously?), they all have become familiar items in your local supermarket all of a sudden. But apart from cous cous, I had rarely cooked with any of them.

But, on a crazy whim, I had recently decided to attempt tabbouleh, a dish fundamentally based on bulgur wheat. So, off I went, purchasing the requisite alternative grain. The dish was a hit, but now I was left with all this...well...alternative grain. Now, I like tabbouleh as much as the next person, but I certainly wasn't going to be eating it straight for the next three weeks to use it up. And I had no idea what else I could make with it.

Well, thanks needs to be given, once again, to Martha Schulman, who includes this recipe in her "Cleaning out the pantry" section of her column. Although, for some reason, her pantry seems to include every single alternative grain on the planet. Well, I suppose she is the writer behind a "healthy recipe" column. It does make a certain amount of sense.

So, kibbeh (which strangely almost rhymes with tabbouleh...is there a bizarre rule of "-eh" endings when it comes to bulgur?). I had no idea what it was but it used bulgur and therefore was right up my alley.

It turns out, it's a wonderful hearty salad (although she makes it into little appetizer balls, an extra touch I wasn't going to do) with fabulous middle eastern flavors. It's also super easy. Win. Win. The only thing that takes some time is the soaking of the bulgur itself (just pour boiling water over it and let it stand an hour). Now, I was tempted to try and skimp on the timing, but a taste test after 35 minutes or so, I was convinced to give it the full hour treatment. Schulman's recipe also lacked oomph, so I boosted some flavors to make it a more aromatic salad. It's great as a main course salad without anything else, but if you want to make it extra hearty, throw some chopped chorizo on it or put it on a bed of salad leaves, and you're in business. 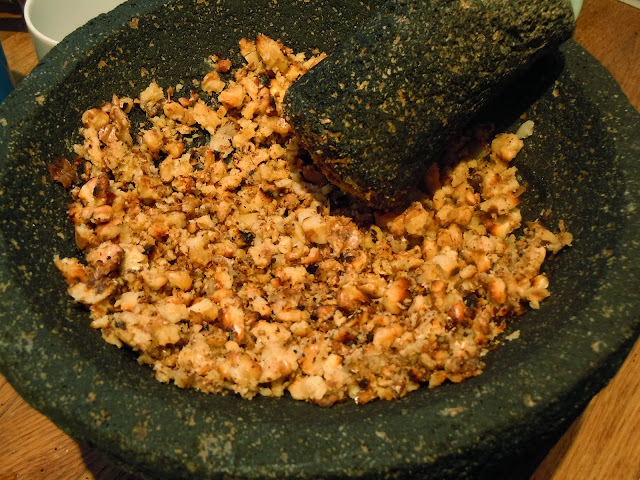 3/4 cup fine bulgur (or, really, any bulgur- depending on how picky you're feeling)

Method
Place the bulgur in a bowl, add salt to taste and pour on boiling water to cover by 1/2 inch. Let sit for one hour, then drain and squeeze out excess water.

Place the garlic in a mortar and pestle with a generous pinch of salt, and mash to a paste. Stir into the bulgur. Add the walnuts, olive oil, parsley, mint, pepper, cinnamon, allspice, cloves, cranberries, and  the lemon juice. Moisten your hands and knead the mixture for a couple of minutes, then allow to sit for 15 to 30 minutes.

Serve either on its own as a salad or roll into small balls and place on top of lettuce leaves to serve as appetizers. 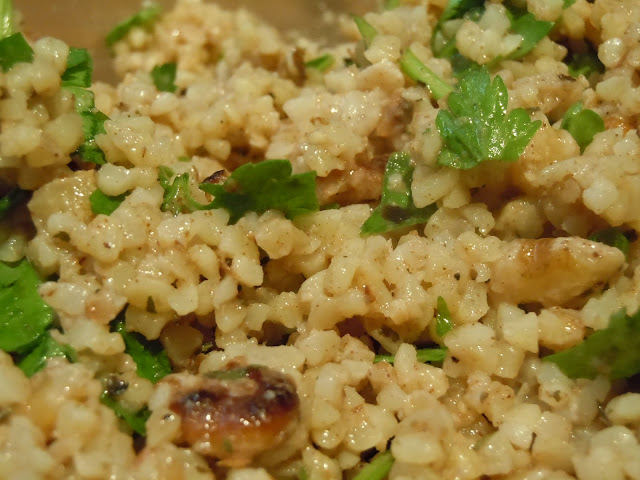 Posted by Academically Malnourished at 2:46 PM