Bacon-Topped Cornbread with Chiles and Cheese 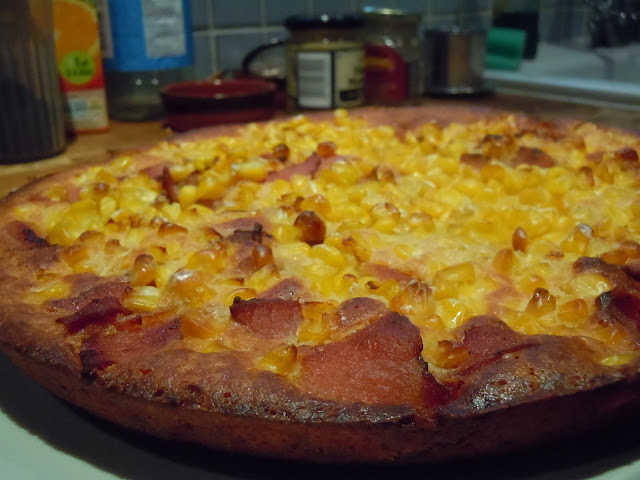 I get hungry just by looking at the name of this dish. I mean, goodness, what isn't there to love? I feel this should be part of my ongoing series of why "Everything's better with bacon". Because it clearly is.

There's no denying cornbread is an American staple. Humble and easy to make, it goes with just about anything. Drizzle honey over it and make it sweet. Chop up some bacon (as we see above) and make it savory. It's hard to go wrong with cornbread.

But strangely, cornbread is still a foreign entity to most Brits. Baked in a skillet, there's something fantastically "frontier-y" about it. There are about 8 million recipes for cornbread online and debates as to how to make it properly can be fierce. While cornbread seems to span the length and breadth of America, you can be judged instantly on where you're from depending on how you make it. Now, I don't have a secret family recipe for it (clearly, as I'm posting this online) but this one, slightly modified from this version via epicurious is tasty as any I've had and fairly easy to make. Judging from the bacon added, I'm thinking this recipe must have Southern origins, but I like to think that I added a bit of southwestern flair to it. Hey, you have to represent local pride somehow. Anyway, I added chiles and Parmesan cheese to the mix, but as I said above, cornbread is forgiving enough to add pretty much anything to.

I also may have forgotten to stir the corn into the mix, accidentally making it a topping. I ended up liking the result, but by all means, stir into the batter before baking.

Coat 12-inch diameter ovenproof skillet (I used the same as I fried the bacon in. It makes it an easy one-dish preparation) with bacon drippings.

Mix in corn (or reserve to place on top), cheese, and chiles.

Sprinkle bacon (and corn, if using) over.

Bake cornbread until golden and tester inserted into center comes out clean, about 40 minutes.

Cool in skillet at least 30 minutes.

Posted by Academically Malnourished at 12:19 PM