Asparagus with Scallops and Black Beans 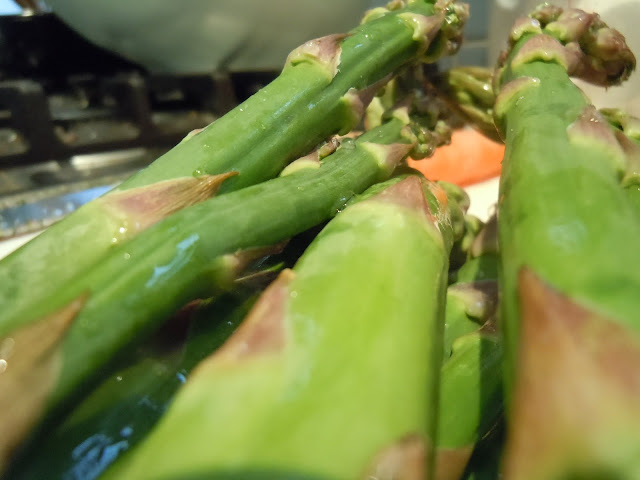 Well, it's official. It's asparagus season. Now you can't move for the green stalks of veggie delight. Unlike so many other items that you can now buy 12 months out of the year, I think asparagus has retained its hold as the fleeting food of summer. Like strawberries, you have to appreciate it while it's here, for it before you know, it'll be gone.

So, in honor of summer (well, late spring) and the joys of warmer weather, I decided to invest in the asparagus craze. As it is such a fleeting food, I've never felt comfortable cooking it. Asparagus is notoriously easy to overcook and there is the ever-increasing threat that you might end up with limp, bland stalks, at which any self-respecting 10 year old would balk. Keeping them nice and crisp is always a challenge. But a quick stir-friy with black beans and scallops, this recipe takes about 10 minutes and is a perfect way to usher in spring.

I thought, living in a multi-cultural hub of activity, buying the fermented black beans would be a piece of cake. On my road there are no less than four different Asian groceries. And so, heart in hand, I went off to each one, asking about the ingredient. No luck. No one seemed to have the faintest idea what I was talking about. In one store I was cautiously show the "beans" aisle, which indeed have black beans, but in the most standard dried variety. I felt absurd asking the kind and obliging shopkeeper (whose English was about at the same level as my Mandarin) if they had any beans that were..."Well, you know, fermented. Old. Do you have any old beans?"

No, silly woman. Why would we have old beans?

Sigh. There was no way of explaining this. I had a sneaking suspicion that the item that I was looking for was the equivalent of butter or sugar in an Asian market and was sitting front and center on the shelves. But no matter how I tried explaining it, I just ended up looking more ridiculous in front of the shopkeeper who was probably wondering why this bizarre American wanted "old beans" from his shop.

So I left. And marched straight into Tesco and, with a heavy heart, bought some "Asian black bean stir-fry sauce", which proudly proclaimed on the package to have "real pan-Asian flavors".
Fabulous.

The moral of this story? If you either a) know Mandarin or b) have a reputable fermented black bean source, have a blast with the original version of this recipe. I was forced down the stir fry sauce road with this one, but I can't *really* complain, as the dish turned out to be delicious anyway.
Ah well, time to brush up on those language skills... 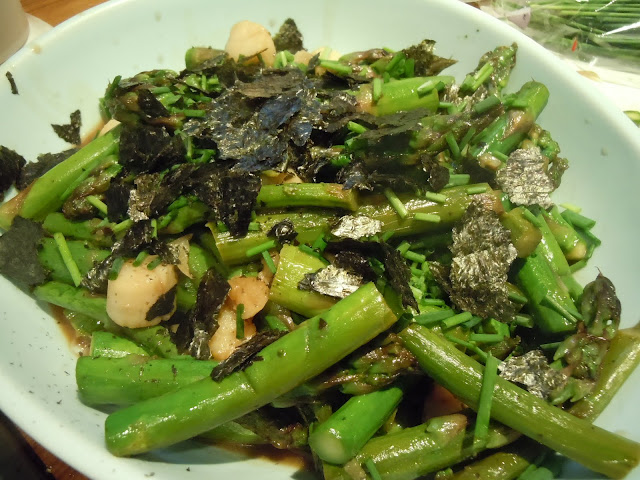 Cook until the asparagus looks dry and is starting to brown.

Combine soy sauce with water and add to pan.

Add black beans and 1/2 pound sliced or cubed scallops to pan along with soy sauce and water.

Cook for about five minutes or until the asparagus is still firm to the touch but tender.

Garnish with toasted nori
Posted by Academically Malnourished at 3:55 AM