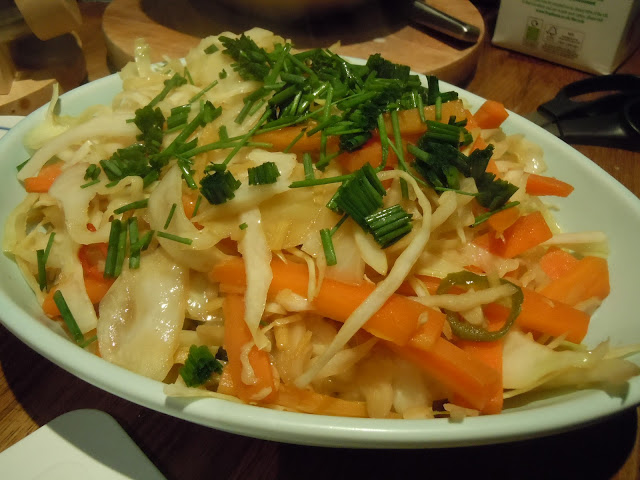 Oh, cabbage. How often I forget about you and how sad I am when I realize how delicious you are. My mother never made cabbage when I was growing up so it always takes me a minute to remember this versatile fabulous vegetable. I'm not sure why, if anything Britain is the land of cabbage. Boiled, braised, baked, you'll find it in everything. And if there's one thing they're never out of at Tesco, it's cabbage.

Which brings me to this fabulously easy recipe (adapted from the New York Times' Recipes for Health section). I was slightly dubious of this dish- it seemed *too* easy, that it would taste of, well, raw cabbage.

I was so wrong. It's spicy, comforting, a perfect side dish. Heck, make enough of this and I'll eat this for my main course. It's done in literally 5 minutes and it tastes like the best kind of unhealthy Asian takeout. But it's not. It's, get this, healthy. Well, I suppose comparatively so. There's still oil (albeit a small amount), but literally, most of the delicious flavor comes from a bit of star anise, ginger, garlic, and red pepper flakes. That's it! Simple as pie.

1 star anise, broken in half 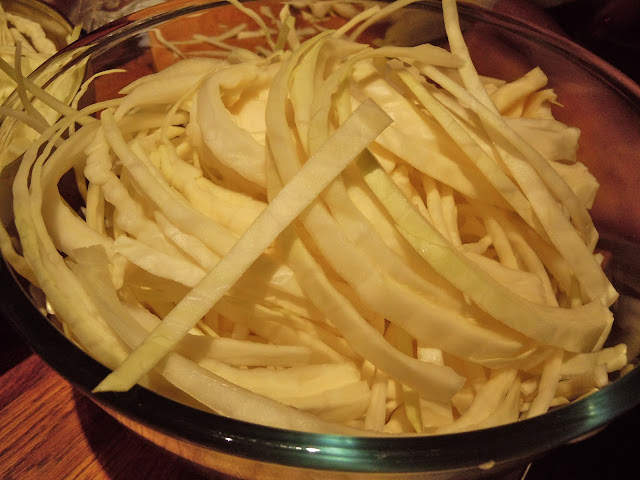 Method
Combine the garlic, ginger, red pepper flakes and star anise in a small bowl. Combine the soy sauce and wine or sherry in another small bowl.

Heat a large flat-bottomed wok or skillet over high heat until a drop of water evaporates within a second or two when added to the pan.

Swirl in the oil by adding it to the sides of the pan and tilting it back and forth.

Add the garlic, ginger, pepper flakes and star anise. Stir-fry for a few seconds, just until fragrant, then add the cabbage and carrots.

Stir-fry for one to two minutes until the cabbage begins to wilt, then add the salt and wine/soy sauce mixture.

Cover and cook over high heat for one minute until just wilted.

Uncover and stir-fry for another 30 seconds, then stir in the chives or cilantro and remove from the heat.

The cabbage should be crisp-tender.

Serve with rice or noodles.

Posted by Academically Malnourished at 1:12 PM