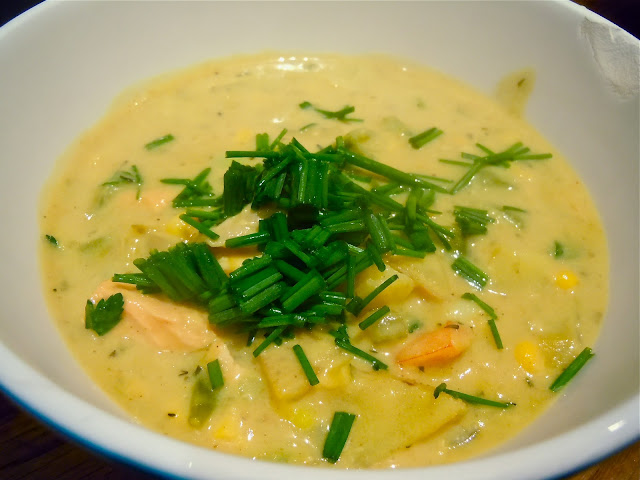 I miss chowders. Well, to be honest, I miss all kinds of soup that have "bits" in them. The British just don't appreciate them. Soup, on this island, is more often than not just a puree of vegetables. Delicious? Quite often. But still- I long for things like chicken noodle soup, beef with barley, even just a hearty mixed vegetable will satisfy me so long as there is more than one consistency to it!

And thus I yearn for American-style chowders. Don't even get me started on what I've seen pass for New England Clam Chowder over here. It's not right and I refuse to support it.

But, on that note, all is not lost. NPR has seen fit to publish online all that is good and right about chowders. And, more specifically, how you can create such glories at home. If there was ever a reason to support public radio, this is it. When I saw the idea for a spicy chowder, I couldn't help myself. If there was only one thing missing from the glory of this soup-based food, it was spice. And now, here I was, presented with a happy remedy.

My own version was sadly lacking clam juice, which I thought was unnecessary at the time but have subsequently reconsidered. I think will make the broth even better and give it that punch of salty that really evokes the sea when you have a seafood chowder. As it was though, it was enough to satisfy two non-Americans that they've really been missing something. And usually, that's all I aim for.

Method
Using a large pot, heat to medium and add the butter to the pot. When it has melted, add the onion, celery, leeks, garlic, and fennel. Cook, stirring frequently, until the onion is translucent and the vegetables have softened, 7 to 8 minutes. Reduce the heat to medium-low and sprinkle in the flour, stirring well with a wooden spoon until it is fully incorporated and the mixture is pasty.

Gradually pour in the wine, stirring until the mixture is well blended. Add the chicken broth and 1 cup of the clam juice (if using). Stir in the potatoes, lima beans, sugar snap peas, bay leaf, parsley, oregano and the seasonings. Cover partially with a lid and let the chowder simmer gently over medium-low to low heat until the potatoes are tender, 20 to 30 minutes.

Stir in the cream and return the chowder to a simmer. Add the corn and the fish and cook for 5 minutes. Add the shrimp and cook 5 minutes more, or until the shrimp have turned pink. Ladle the hot chowder into bowls and garnish each serving with a sprinkling of chives. Serve immediately.

Note: The chowder may be prepared up to several hours ahead up through the cooking of the potatoes. Remove from the heat and let sit at room temperature. A few minutes before serving time, reheat the chowder to a simmer and finish the recipe as directed.
Posted by Academically Malnourished at 3:05 AM