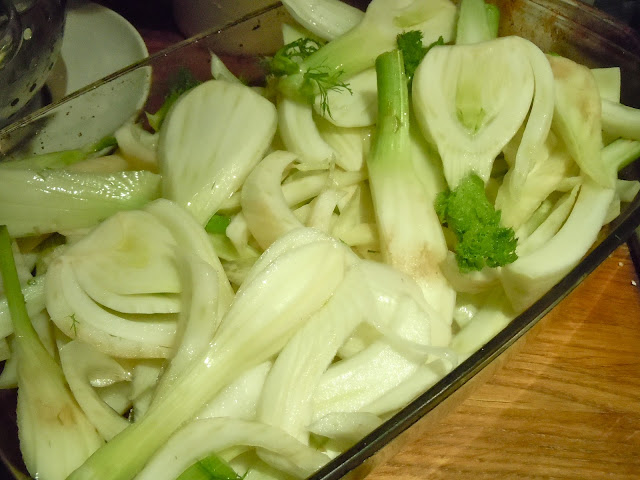 I'm a bit ashamed. Clearly this a work-in-progress photo. But as the end result was consumed in a matter of minutes, I can only be kinda upset that a final version photo didn't happen. Because this also marks a culinary triumph; one in which I was able to convince my roommate that not only is fennel delicious and useful for more than just sprinkling on salads, but that it's also uber-easy to make. Although now that I have accomplished this great feat, it means that she comes home with about 5 pounds of fennel from our weekly farmer's market. At least it's cheap!

Anyway, this recipe is an old favorite of mine. When I lived in Toronto, a friend of mine introduced me to Giada de Laurentiis. I was a bit skeptical a first (I mean, she smiles an awful lot) but when I tried some of her so-called "easy" Italian, I was hooked. Her brilliance is often due to how simply she treats her ingredients. I give the woman full props for this recipe, but seriously, this is just sliced, baked fennel. You just slice fennel, sprinkle it with olive oil, pepper, and salt. Roast it in the oven. Add parmesan to it. Roast it some more. And you're done! Well, now that I've given you the entire recipe, I feel foolish posting it but nevertheless...

Preheat over to 375F. Lightly oil a 13x9x2-inch glass baking dish. Arrange the fennel in the dish.

Sprinkle with salt and pepper, then with the Parmesan cheese. Drizzle with the oil. Bake until the fenel is fork-tender and golden brown, about 45 minutes. Chop enough fennel fronds to equal 2 teaspoons, then sprinkle over the roasted fennel and serve.

Posted by Academically Malnourished at 4:31 AM