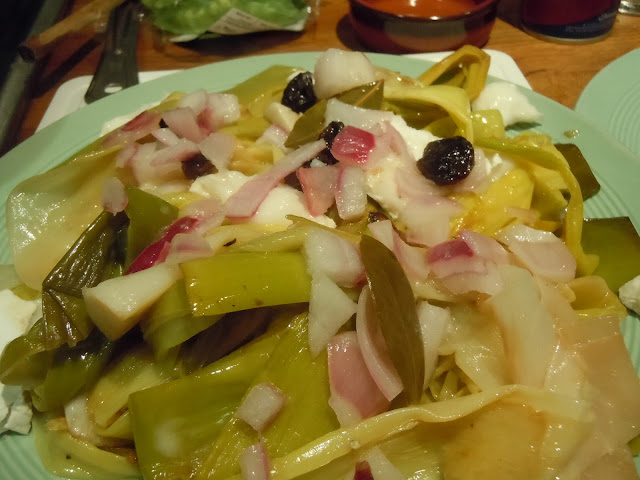 I know, I know, this is the second braised leeks recipe I have posted. And since I swore that the first one was so delicious, why on earth would I try another one? Because this is just as delicious, that's why. This recipe is adapted from Yotam Ottolenghi, who is known for doing all sorts of good and right things with food.

I was intrigued by this recipe because it seems to do the exact opposite of the other braised leeks recipe: simmering the leeks in liquid before braising them. The result is a softer, much sweeter leek. The sauce that is made from all the leftover juices is decadent and makes the dish. Unfortunately, the nice charred taste you get from roasting the leeks first before simmering them is lost, but still, this recipe is wonderful as a chicken side dish (see next post) and hey, who are you to turn down anything with goat's cheese? I certainly can't.

Note: The original recipe called for goat's curd. Now, you may live on a farm and have easy access to this. I don't. So goat's cheese it was, and it scrumptious. The curd will just have to wait.

First prepare the leeks. Discard the green part, then cut each leek widthways into two, each about 10cm long, and wash.

Lay the leeks in a large, shallow pan, add the bay leaves and garlic, and pour in the wine, olive oil and water, so the leeks are half-covered in liquid.

Season, then simmer gently for anywhere between 30 minutes and an hour (I did this for no longer than 30 minutes), turning the leeks a few times during cooking, until a knife can be inserted through the middle without any resistance.

Once tender, use a slotted spoon to transfer the leeks to a plate and set aside. Strain the liquid into a small pan and reduce over a high heat until you are left with two tablespoons of sauce. Remove from the heat, add the onion, currants, vinegar and sugar, and season. Set aside so the onion and currants soften in the residual heat while you finish off the leeks.

Heat the sunflower oil in a large frying pan and fry the leek pieces for a couple of minutes a side, until lightly golden. Place on a plate and leave to cool to room temperature.

To serve, divide the leeks between four plates. Top with small chunks of goat's curd, followed by the onion and currant dressing.
Posted by Academically Malnourished at 5:58 PM