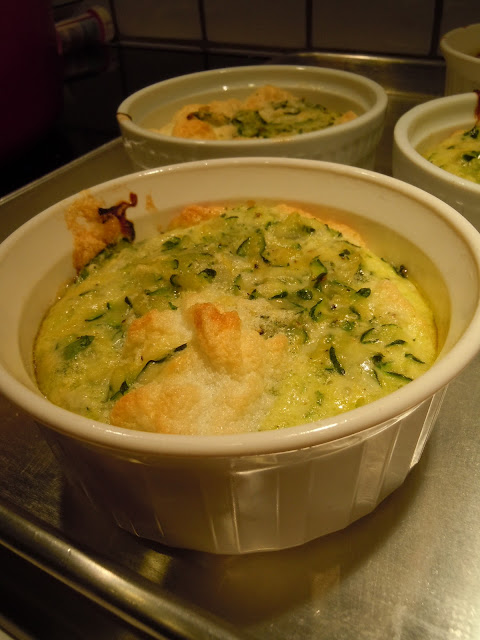 Deep breath, everyone. It's soufflé time. I have avoided making one of these ever since I learned that they were the bane of every chef. "Will the soufflé rise?" seems to be the fearful question of every person who has attempted this finicky egg-based dish.  But when Bittman swore he had found an (almost) foolproof recipe, I knew it was time to face the music and give it a go.

And, who could have guessed? An "easy" soufflé recipe that was actually easy! The soufflés rose as they should in the oven, were light and fluffy on the table, and amazingly delicious! Well, the delicious part isn't so hard to imagine. I mean, the recipe is basically eggs, butter, and cheese. What's not to like? This is even a good recipe for those people who are not big fans of zucchinis (Bittman also suggests using spinach in this recipe). Now, the other ingredients probably counteract any vitamin goodness the green vegetables would give you, but hey, at least it takes away some of the soufflé guilt, right?
Right.

Butter four 1 1/2 -cup ramekins or one 6-cup soufflé dish. Heat the oven to 325 degrees. Put the oil in a large skillet over medium-high heat; when it’s hot, add the onion and garlic and cook until soft, 5 to 8 minutes. Add the zucchini, season with salt and pepper, and continue cooking, stirring occasionally, until very tender, another 10 to 12 minutes. If you prefer, substitute a 10-ounce bag of spinach, chopped and cooked the same way. Drain the vegetables if there is excess liquid, and let cool.

In a large bowl, beat the egg yolks and cheese with some salt and pepper. Add the vegetables and parsley and stir. In a clean, dry bowl, beat the egg whites until they are light and fluffy and just hold soft peaks; stir about a third of the whites into the yolk mixture to lighten it, then gently fold in the remaining whites, trying not to deflate them much.

Pour the soufflé mixture into the ramekins or dish. Bake until golden and puffy, 30 to 35 minutes, and serve immediately.

Posted by Academically Malnourished at 4:52 PM