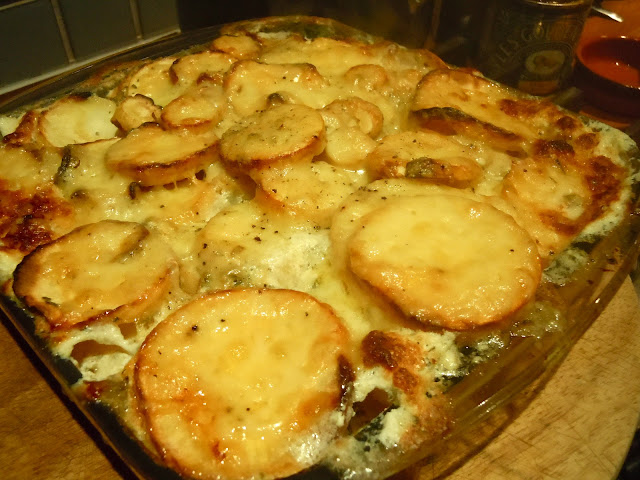 Another slightly horrific picture of a gratin, I apologize. There's just not other appropriate way for me to display the cheesy glory that is this recipe (similar to, I imagine, any gratin dish). Again, I have to cite the "Recipes for Health" section of The New York Times as my inspiration.

Which makes it the perfect time of year to celebrate the perhaps coldest section of the United Kingdom: Scotland.

Yes, that's right, once a year, the Brits pay homage to that most indecipherable of poets, Robbie Burns, Scotland's national hero. Perhaps because this is the time of year when most of Britain resembles Scotland: cold, dark, and slightly tipsy.
But, as only the Scots can, they make a merry night of it. Burns' Night, as it's called, involves a great feast and Scottish dancing (called a ceilidh, though just try to say that phonetically).
And what better way to celebrate Scotland than to sample some of Scotland's most famous fare? That's right. Haggis. As Robin Williams says, I'm pretty sure that most Scottish cuisine was based on a dare. Innards and oats, you say? Sign me up!
But seriously, it's delicious. It's warming, it's filling, perfect for cold, dark, slightly tipsy nights such as these. And while haggis is traditionally served with "nips and tatties" (no, not that. I mean, roasted parsnips and cabbage. Get your mind out of the gutter!), I thought we could change the recipe slightly and throw some cheese and milk in with the mix. Hey, the Recipes for Health people recommended it. Who am I to disagree about its apparent "healthiness"?
Whether you're serving this with sheep innards or not, this is a great winter dish and amazingly easy to make. The timing can throw off things, but I cut corners and was able to get this dish out in less than hour (despite what the recipe may say).
G'un robh math agad! (or something to the effect) 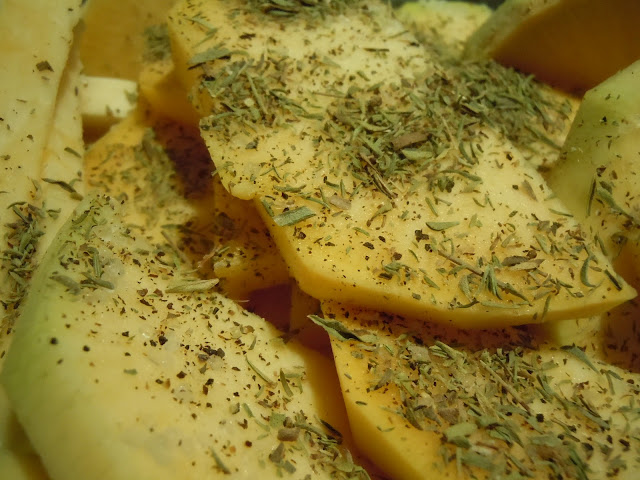 1. Preheat the oven to 400 degrees. Butter a 2-quart gratin or baking dish. Place the sliced vegetables in a large bowl, and season generously with salt and pepper. Add the thyme, and toss together.

2. Arrange the vegetables in the gratin dish. Add the milk, season with more salt and pepper if you wish, and place in the oven on the middle rack. Bake 45 minutes (I did this in 35 min); every 15 minutes, press the vegetables down into the milk with the back of your spoon. Add the cheese, and stir in carefully to incorporate. Return to the oven, and bake another 30 to 45 minutes (again, I cheated and did this for 25 minutes), stirring or pressing the vegetables down with the back of your spoon every 10 minutes until the gratin is nicely browned and most of the liquid is absorbed. Remove from the heat and serve, or allow to settle and serve warm.
Posted by Academically Malnourished at 3:58 PM