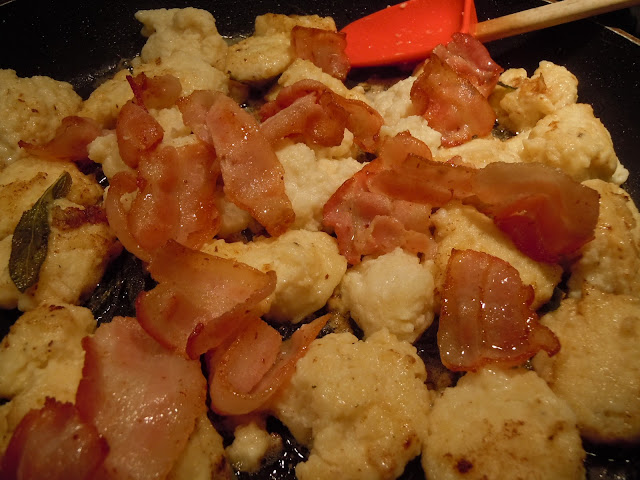 I have had a love/hate relationship with gnocchi since I first learned about it. I mean, first there's the name issue. How to pronounce it? I've heard enough variations from people who "swear" they're right, that if I can help it at all, I don't even say it anymore (and luckily, in blog format, I only have to write it.) Then there's the preparation. There also seems to be a bit of diverging opinions here about how gnocchi should be served: what kind of consistency and with what ingredients. It was all a bit too much to take in personally. But let's just say that the idea of how wonderful gnocchi can be has stayed with me througout this troubled time.

When I saw Bittman had developed not only a "no potato" version but also one that involved only ricotta cheese, I was intrigued. Perhaps here was finally a way for me to make it, avoiding all those long bitter debates. Who cares if you think the potatoes should be mashed for appropriate gnocchi preparation? This recipe doesn't even HAVE them!!

And so, I attempted this recipe, only realizing halfway through that, if gnocchi in and of itself was bad for you, this was a heart-stopping disaster. The "pasta" dough is made from an entire tub of ricotta cheese. Oh yes. Feel those arteries clogging. And if that wasn't enough, I felt the need to "spruce" the recipe up a bit by adding bacon on top. And it was delicious. Perhaps a once in a lifetime dish (hey, the arteries can only handle so much).

Method
Bring a large pot of water to a boil and salt it. Combine the ricotta, eggs and Parmesan in a large bowl, along with some salt and pepper. Add about 1/2 cup flour and stir; add more flour until the mixture forms a very sticky dough. Scoop up a spoonful of dough and boil it to make sure it will hold its shape; if it does not, stir in a bit more flour.

If you're using the bacon, fry it in a large skillet until crispy. Remove it with a slotted spoon to some paper towels until later. Put the butter in the skillet over medium heat. When it melts and turns a nutty brown color, add the sage. While it fries, drop the ricotta mixture by the rounded tablespoon into the boiling water, working in batches of six or so at a time so as not to overload the pot.

When the gnocchi rise to the surface, remove with a slotted spoon and transfer to the skillet. When all the gnocchi are done, toss, taste and adjust the seasoning, return the bacon to the skillet, and serve immediately.