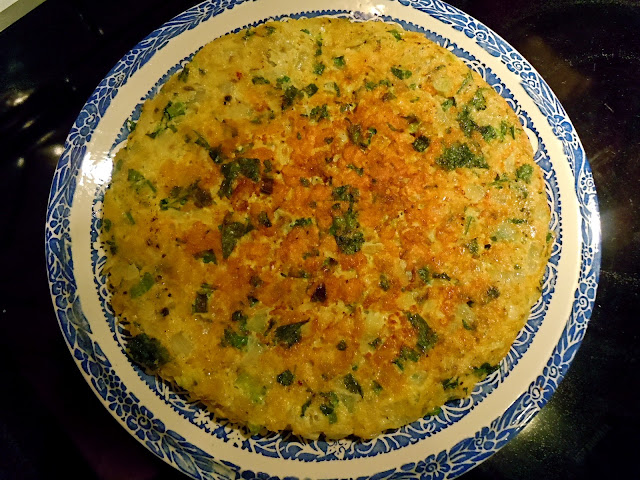 I've always been rather apathetic about the Spanish tortilla. For a national dish, it's always seemed rather, well, mundane. Just eggs, cheese, potatoes, and onion. Maybe a hint of spice. But that's it.
But I have underestimated the tortilla. In its simplicity, it has the soul-nourishing goodness of comfort food. Well, comfort food for Spanish people. And now that I've made one, I realize that it is yet another "deceptively" simple dish. Yes, it may just be a few ingredients, but the method of cooking will separate the weak from the strong. Literally. Try carrying the necessary cast-iron skillet from the stove to a hot broiler without burning yourself.
That's what I call culinary endurance.

Now, oddly enough, this recipe is adapted from my latest favorite recipe book, Around My French Table by Dorie Greenspan. I have no idea how this clearly Spanish recipe snuck in to the lot, but perhaps the sheer fact that the two countries share a border is enough for it to gain entry into a French cookbook. Greenspan is also the one who devised a clever, and dare I say "American" way of simplifying even this "simple" dish. Instead of spending your time peeling, boiling, and frying the potatoes to go into the tortilla, she uses potato chips. Seriously. Lays standard potato chips. I was intrigued when I read the recipe, particularly when she insisted that no one would ever notice the difference when they tasted it, but sure enough, the tortilla comes out looking like, well, a tortilla. Not a potato chip monstrosity.  Now, I'm not sure how the Spaniards will react to this development but it was good enough for me! Did I mention that I hate peeling potatoes? Oh, and the smashing of the potato chips is cathartic enough for anyone. And, well, just plain fun.

Method
Put the potato chips in a bowl, reach in, and crush the chips (I did mine in a plastic bag to avoid mess).

Put the eggs, onions, scallions, herbs, garlic, and spices into another bowl. Season with salt and pepper and whisk to combine. Pour the eggs over the chips and stir to blend well.

You'll need a skillet that can fit under your broiler. Mine was an old cast-iron skillet about 10 inches (and was big enough to fit the recipe). Tis a thing of glory, but really, use whatever skillet that can fit comfortably in your oven. A nonstick sillet will also work. If you're not sure about the handle, wrap it in foil.

Position a rack under the broiler so that when you slide the skillet onto it, it will be about 6 inches from the heat source. Turn on your broiler.

Place the skillet over medium heat and pour in the olive oil. When the oil is hot, give the eggs and chips a last stir and pour them into the pan. Use a fork to push the mixture to the edges of the pan if necessary, then let the mixture cook. Cook roughly 5 minutes, or until it is set around the edges and the top is almost done (this is more art than science. Just keep an eye on the eggs). Remove the pan from the heat and run a spatula around the edges and under the tortilla in case it has stuck to the pan.

Serve warm or at room temperature.
Posted by Academically Malnourished at 10:40 PM