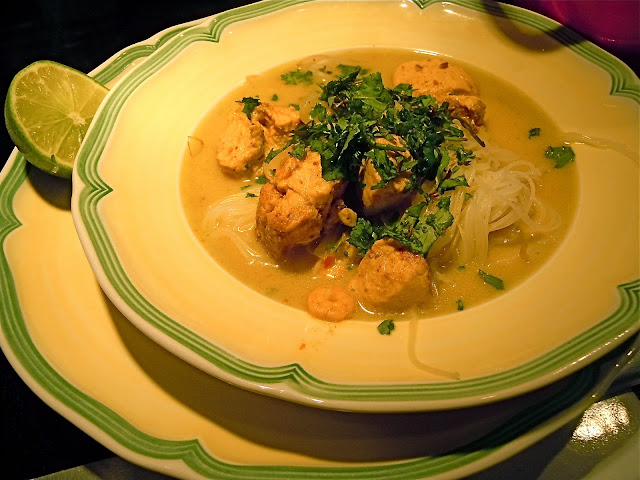 Oh soup, how I love thee. And, really, any kind will do. Well, that isn't entirely accurate. The British have a way of preferring "blended vegetable" soup that I just can't get behind. No chicken noodle. No hearty whole vegetables with a little pasta. Nope. Carrot and coriander. Potato and leek. Tomato. All just blended versions of various vegetables. Give me a hearty soup with, well, bits in it any day.
And on that note, we come to laksa. I have also fallen deeply and madly in love with Asian soups over the past several years. The British may be clueless when it comes to a warming bowl, but Asia has it down pat. I'm also a complete sucker for anything that comes with a coconut milk-based broth. So sue me.

Anyway, the good people at Sunset magazine must have heard my yearns for a good "chunky" soup, for in their January edition, they featured a whole spread on various hearty soups. One of which was laksa. They insisted that, despite the arm-length long ingredient list, it was an "easy" or "fast" soup. Ok, this isn't technically true. And some of the ingredients are a bit hard to find (e.g. "shrimp paste" whch I was only able to find after a New Year's sojourn to the land of all Asian-based products, San Francisco). In the first incarnation of this soup, with no shrimp paste in sight, I relied on some Mexican canned shrimp (which is as dubious as it sounds). The flavors still worked well but I wanted to see how the soup tasted with the shrimp paste. And, oh yes, t'was worth the trip. So, hey, if you're one of those people (like me) that somehow doesn't have all of the following ingredients to hand, never fear, the soup is delicious with any Western versions of items you happen to dig up. If, however, you are lucky enough to have the real ingredients available, by all means, indulge. This soup will not fail you.