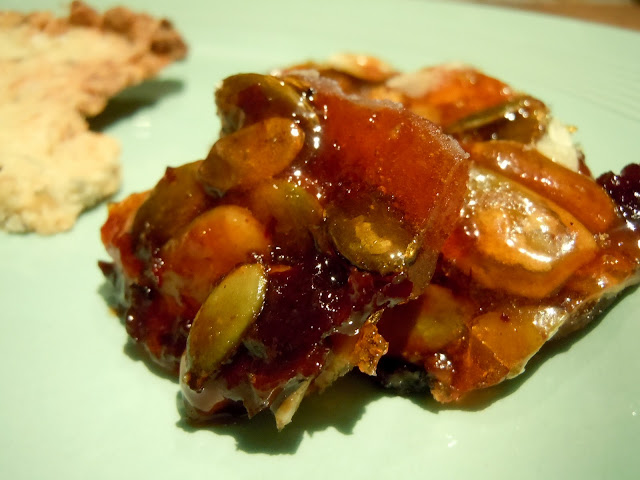 The next few posts date from the 4th annual Expatriate Thanksgiving Alliance. Ok, so it's long past (American) Thanksgiving, but never mind. These recipes can just as easily work for Christmas. And, come to think of it, New Years, Easter, July 4th...well, you get the idea.

I will mention that they can all be found in Mark Bittman's (yes, another homage to the Bittster) 101 Head Starts on the Day, first published in the New York Times for Thanksgiving 2009. I used some of these for Thanksgiving last year and they were such a hit (and did I mention they were easy?) that they deserved to be brought out again for another round of Thanksgiving fun.

This particular recipe will probably create the largest divide among the audience. Some people could not get enough of this stuff. The pumpkin seeds and chiles make for an unusual combination in brittle, I grant you. But come on, we've been putting chiles in chocolate for years now and no one's made a huge fuss. Personally, I love this dish. For ease, well, clearly. But mostly for the Southwestern Thanksgiving flavors it invokes. Try it out with varying levels of chile, depending on your audience.

One note of caution:I will say, be careful not to completely overdo the ancho paste as it will make the brittle a little softer and will take longer to firm up. I popped my version in the freezer for about 10 minutes just so that the brittle would harden faster.
Hey, I live for the moment. That's what I do.

3 mashed canned chipotle chiles in adobo (or to taste)

Cook 2 cups sugar and 2 tablespoons water in a deep saucepan over medium heat, stirring once in a while until golden.

Off heat, stir in 2 cups peanuts or pumpkinseeds and 1 or 2 mashed canned chipotle chilies with a bit of their adobo (more if you like things fiery).

Quickly spread the mixture out on a buttered rimmed baking sheet and let cool before breaking into pieces.
Posted by Academically Malnourished at 6:11 PM