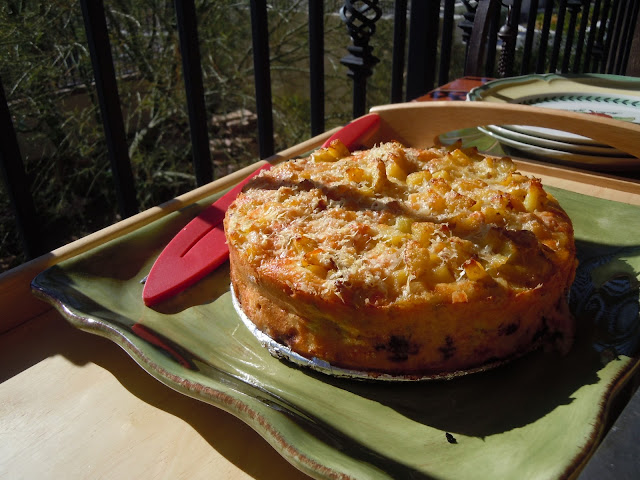 We are not usually a "breakfast" family. Sure, my mom will indulge in the occasional poached egg and my Dad is a softie for homemade pancakes, but as a familial unit, we've become increasingly lax about our morning repast. On this most recent visit, I made the shocking discovery that my parents had finally abandoned the concept altogether, preferring to wait until lunchtime to start scouring the fridge for munchables.

But for Christmas at least, my parents came to their senses. This is partially thanks to my mother who has faithfully subscribed to cooking magazines for decades and has rarely, if ever, cooked something from one of them. My mother needs a long gestation period before she decides she would like to try one of the recipes featured. This particular time was about 3 years. Sitting in the kitchen one afternoon, she pulled out a December 2007 edition of Cook's Country and announced that the breakfast casserole in it "looked neat". And thus our Christmas breakfast 2010 was born.

Apparently these "impossible" breakfast casseroles used to be all the rage...in the 1970s. The trick behind it was the lack of a proper "crust" to the casserole. Instead, a biscuit batter (made from Biquick, milk, and eggs) was poured over the contents and, once baked, Presto! a seemingly impossible crust was formed!

And indeed, presto was the word of the day. I hesitate from making baked goods in the a.m., usually an alert and ready mind is required for such projects, and I really only hit my stride around 11 (after multiple cups of coffee). But Mom and I paired up for the holidays and this thing was ready in about an hour- easy considering how impressive it looked. As a desert dwelling family, we were even able to breakfast outside on Christmas morning. And my longing for a white Christmas went right out the door into the 70 degree sunshine and thanked its lucky stars for being in Phoenix.

Note: This dish does require timing. I recommend (and it almost pains me to say this) getting all your chopping and general "mise-en-place-ing" ready before hand. It's simple if you have everything to hand, but it can turn into a timing nightmare if you are caught without a component ready at the right time.

Also, the one thing that would be an improvement to this "easy" casserole would be some nice herbs, like rosemary, sage, or thyme. We used a sage sausage (thanks Jimmy Dean!) but I would even add more herbs to give it some flavor. We ate our casserole with salsa but, hey, we're from Phoenix.

1. Adjust oven rack to upper-middle position and heat over to 425 degrees F. Prepare a 9-inch springform pan by lining the bottom of the pan with aluminium foil (preferably nonstick), attaching the sides of the pan, and tucking the foil underneath the pan bottom. Coat the sides and bottom with cooking spray. Set the pan aside on a rimmed baking sheet.

2. Whisk eggs, milk, and 1/2 tsp salt in bowl until well combined. Stir in flour until just incorporated; the mixture will be a bit lumpy. Whisk in butter until batter is smooth. Stir in scallions and set batter aside while preparing filling.

4. Heat oil in skillet with sausage fat over medium-high heat until shimmering. Add potatoes and 1/4 tsp salt and cook until potatoes are golden and crisp, 8-10 minutes. Drain potatoes on paper towels.

5. While potatoes are cooking, place springform pan with sausage in over for 10 minutes. Remove pan from oven and, working quickly, sprinkle 1/4 cup cheese over sausage and pour bater evenly over filling. Scatter potatoes on top and sprinkle with remaining cheese. Bake until puffed and golden, 25 to 30 minutes. Remove pan from oven, run knife around edges of pan, and let cool for 5 minutes. Release outer ring and, using spatula, transfer casserole to serving plate. Serve warm. 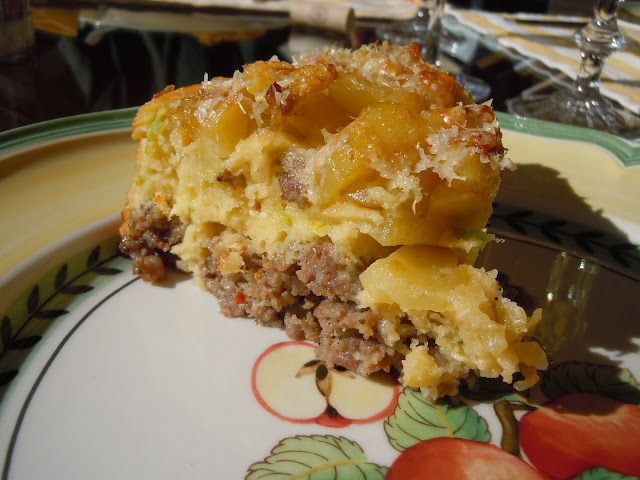 Posted by Academically Malnourished at 6:47 PM