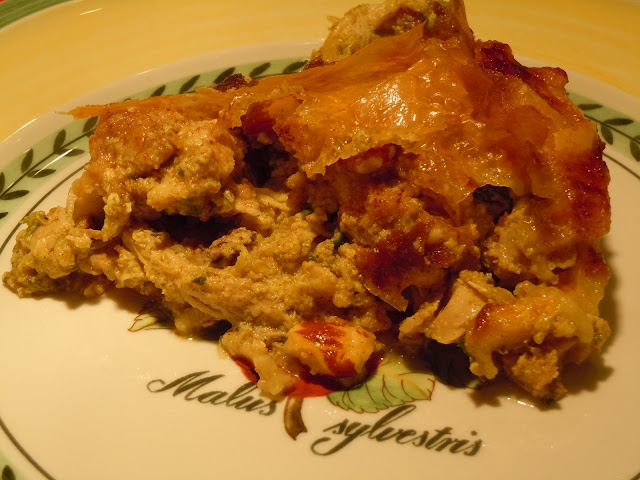 I was lucky enough to go to Tangiers, Morocco when I visiting Spain way back in 2004. I took the ferry over for the day from Gibraltar and got to set foot in Africa for a few fun hours. This, being me, included a great chance to taste some Moroccan cuisine, something which I had only heard legends about before arriving. The place we went to for lunch featured a Moroccan specialty, b'stilla, basically a chicken pot pie amped up in the best way possible. The flavors of cinnamon and coriander highlight the roast chicken and almonds- absolutely delicious. I had never thought of adding what I considered to be a spice reserved predominantly for desserts into meat, let alone poultry.

I was hooked from that moment on, but I had never thought about making b'stilla for myself until I visited home this Christmas. My mother had ambitiously bought a weighty French cookbook, Around My French Table, by Dorie Greenspan but had yet to cook anything from it. As I was leafing through it, what did I find? A recipe for b'stilla! It looked easy enough so I set to the task at hand.

Now, when I say "easy enough", I mean "easy enough considering I rarely cook with pastry, let alone frozen filo dough which this recipe depends on". This dish defines the concept of "multi-step". I certainly would never make this as an easy weeknight meal, but as I was home for Christmas and had the time on my hands, it was a great way to introduce myself to the wonders of pre-made frozen pastry. It also came out fabulously- a testament to the "relative" ease of Dorie Greenspan's book.

I've copied the recipe here fairly faithfully, adding in a few notes to help the unknowing cook (like myself) stumble through this Moroccan specialty. If you do decide to confront the challenge, I guarantee you, you will not be disappointed.

8 chicken thighs skinned (Greenspan wants you to use bone-in, but I did it without and it came out just fine)

Big pinch of saffron threads (I didn't have saffron so I used about a teaspoon of turmeric, again, no problems with the switch)

8+ sheets filo (each 9x14 inches)
(NB I used frozen filo pastry and it was a nightmare to get the sheets unstuck to each other. If   you can, try to find refrigerated filo which I have heard is much easier to work with)

1. Put the chicken pieces, onions, garlic, and spices into a Dutch oven or other large casserole and give everything a good stir. Cover and let the chicken marinate for one hour at room temperature. (If it's more convenient for you, the chicken can be marinated in the refrigerator for as long as one day)

2. Add the chicken broth and 1 tsp salt to the pot and bring to a boil over high heat. Lower the heat so that the liquid simmers, cover the pot, and cook for 1 hour, at which point the chicken should be falling-off-the-bone tender (or just tender if you're using boneless chicken).

3. Using a slotted spoon, transfer the chicken to a bowl. Strain the broth, saving both the liquid and the onions. When the chicken is cool enough to handle, remove the meat from the bones and cut it into small cubes or shred it.

4. Clean the Dutch oven and pour the broth back into it, or pour the broth into a medium saucepan. Whisk in the lemon juice, bring to a boil, and cook until you have 1 cup liquid. Reduce the heat to low.

5. Beat the eggs with honey, and, whisking all the while, pour into the broth. (NB!! Ok, this step is a little treacherous. Be SURE that you broth has significantly reduced in temperature before you add the eggs and honey to the mixture. If the broth is too hot and you are not whisking enough, your eggs will scramble in the mixture. I was able to avoid the problem, but only just.

6. Heat, whisking constantly, until the sauce thickens enough thtat your whisk leaves tracks in it, about 5 minutes. Pull the pan from the heat and season the sauce with salt and pepper.

7. Sir the chicken and reserved onions into the sauce, along with the cilantro and parsley. (You can make the chicken and sauce up to 1 day ahead and keep it covered and refrigerated.)

8. Center a rack in the oven and preheat the oven to 400 degrees F. Line a baking sheet with foil.

9. Take your filo sheets (either defrosted or taken from the fridge) from the package and cover them with a damp kitchen towel. Brush a 9-inch round cake pan, one that's 2 inches tall, with melted butter. Brush 1 sheet of filo with melted butter and center it in the pan, so that the excess hangs over the edges. Brush another sheet and press it into the pan so that it's perpendicular to the first sheet and forms a plus sign. Place a third and then a fourth buttered sheet into the pan so that they form an X; the overhang from all the sheets shoudl cover the edges of the pan. (OK, separating the filo sheets can be a bit of a trick. If you find that each section has two sheets rather than one, believe me, it'll be ok. Just make sure the base is approximately level when you finish). 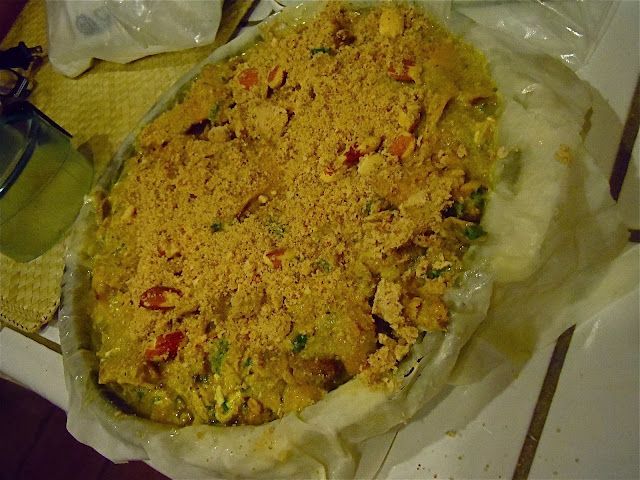 10. Sprinkle half the almonds over the filo. Spoon in the saucy chicken, spreading it evenly across the pan, and top with the rest of the almonds. Fodl the overhanging filo over the chicken.

11. Butter the remaining sheets of filo, stacking them one on top of the other on the work surface. Using a pot lid or the bottom of a tart pan as a guide, cut out a 10- to 11- circle. Center the circle over the cake pan and gently tuck the eduge of the dough into the pan, working your way around it as though you were making a bed. Brush the top of the b'stilla with a little butter and sprinkle with some cinnamon sugar. Place the pan on the baking sheet.

12. Bake the b'stilla for 20 minute, then lower the temperature to 350 degrees and bake for 20 minutes more. If the top seems to be getting too brown at any point, cover it loosely with foil. Transfer the b'stilla to a cooling rack and let it rest for about 5 minutes.

13. Lay a piece of parchment over a cutting board and have a serving platter at hand. Turn the b'stilla out onto the parchment-lined board and then invert it onto the serving platter, so that it's right side up. Serve the b'stila now, cutting it into wedges, or serve it warm or at room temperature. (Ok, there was no way I was flipping this bad boy after so much work. I served mine from the pan and it held together just find, but hey, for presentation's sake, this isn't a bad idea for future reference.) 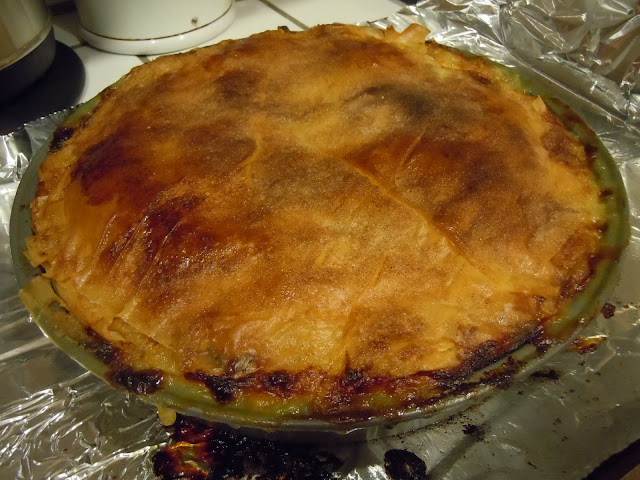 Posted by Academically Malnourished at 7:56 PM