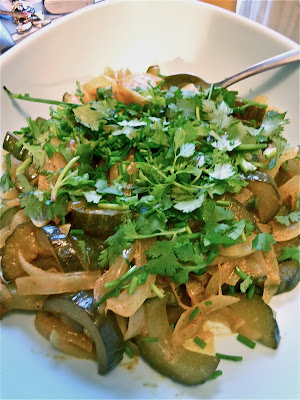 A move to a new kitchen (and accompanying new kitchenware) had to sponsor a feast of epic "moving-in day" proportions. Although this feast took place about 5 days after the actual move, it was a great way to break in (sometimes literally) the new appliances and flatware.

Because karma is kind, my new roommate has a penchant for buying produce at the weekly farmer's market. She brought home the most beautiful cucumbers, fortunate as the New York Times had just devoted an entire section to the vegetable (well, actually fruit, but let's not be silly). I had never thought to "curry" cucumbers before but it was a great late summer side dish. The NY Times recommended using about 1 teaspoon of curry powder which I thought to be absolutely ridiculous. I used at least 5 and still thought it could have used more. Of course, it's entirely up to taste, but I say the more curry the better.

1 small onion, cut in half lengthwise, then sliced across the grain

2. Heat the oil in a large lidded skillet or saucepan over medium heat, and add the onion. Cook, stirring, until tender, about five minutes. Add a pinch of salt and the curry powder, and stir together for another minute. Add the cucumber, and cook, stirring, for three minutes. Stir in the wine, and bring to a simmer. Cover, reduce the heat and simmer 15 minutes. Uncover, raise the heat and cook until the liquid evaporates. Season to taste with salt, remove from the heat and stir in the chives and cilantro. Serve hot, at room temperature or cold.

Advance preparation: You can make these several hours before serving and reheat.
Posted by Academically Malnourished at 3:57 AM