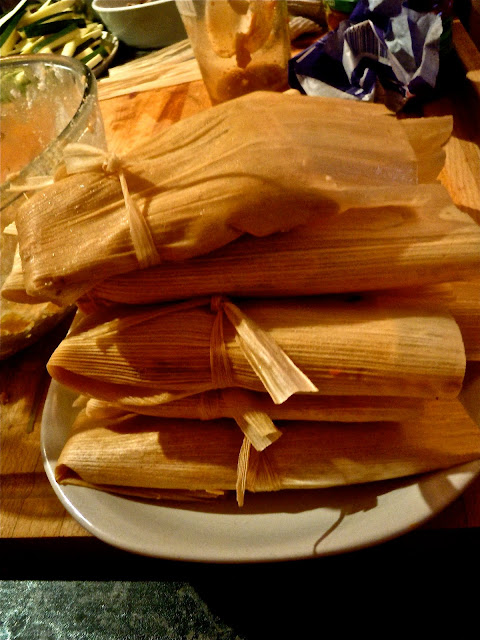 Well, we've crossed another marker in the Mexican food exploits of UK living. Pork tamales. This is something I've wanted to make for years. But if I've moaned about sourcing ingredients before, try finding dried corn husks in the UK. This was a necessary Arizonan import. Intent on my goal, I brought a bag back with me last time I visited home, where a bag of about 50 are on sale for less than $1. Because honestly. They're corn husks.

Tamales are the ubiquitous Mexican New Year's Eve food. Usually complemented with red and/or green salsa, most families will gather around a large bowl of masa and set up an assembly line for making them.

The trick is to get the balance between the filling (pork in this case) and masa just right. You set grandma up with making the masa, mom gets working on the pork (or whatever filling) and then everyone grabs a corn husk and starts making these little parcels of deliciousness.

Pork is traditional, but you can even make dessert tamales by stuffing the masa with chocolate, dried fruit, or really whatever your heart desires. You will need a steamer for these guys and about a day free for cooking. The recipe I used (adapted from this website) actually advised spending two days on the project. Now, I can justify a day of cooking as thesis procrastination, but even I have to draw the line at two. I started cooking the meat in the morning and it was falling apart (perfect tamales consistency) by 3 or 4 in the afternoon. The masa took minutes to make. So worry not, delicious tamales can be yours in less than 24 hours.

1/4 cup chili powder (I used a blend of ancho and achiote, very smoky and not too hot)

salt and pepper to taste

1 cup lard (or vegetable shortening but good luck finding it!)

Cook the pork in a large pot of water (or in a slow-cooker filled with water) with an onion, 2 garlic cloves, 1 teaspoon of chili powder, salt and pepper. Cook for the day, 4 hours minimum.


After the meat is cooked (so that it falls apart and shreds easily), remove from pot, set aside to cool, and puree the onion and garlic with the broth. Season broth mixture to taste with chili powder and salt.

Shred meat finely with two forks (you can even chop it after shredding), and store covered in refrigerator separately from broth.

Soak your corn husks in a bowl of boiling hot water for about 30 minutes or until they are soft and pliant.

Season shredded meat with chili powder, salt, and cumin (optional) to taste. As you season the meat, add a small amount of broth to moisten meat, but it should not be runny.

For every 2 cups of masa harina (meal), add ½ cup of shortening or lard, 1tsp. of salt, and enough chili powder to make a pink dough. Add broth mixture a little at a time to masa and mix with your hands to get a smooth, spreadable consistency. If you run out of broth, you can use hot water, but you will wish you had plenty of broth.

Spread masa about 1/8 inch thick on corn husk with fingers, leaving about ½ inch border along the sides and 2 inch border along the top and bottom of husk. Use about 2 Tbsp. of shredded meat to fill the tamal (like a cigar). Fold sides until they just overlap, fold narrow end under, and place tamal folded side down.

To keep the corn husk in place, I recommend making small strips of one corn husk, using each strip to tie a "belt" around each corn husk.

To cook, place about 1/2'' of water at the bottom of your steamer, allow the water to come to a boil and then reduce to a nice simmer. Place the tamales in the steamer so that they just overlap with each other (but don't crowd them!) and then steam for 15 minutes or until masa is no longer sticky.

Posted by Academically Malnourished at 3:26 PM