Ok folks, get ready, we've officially reached a new period of blogdom. It's high time I join the program and start showing actual pictures of what this food looks like when cooked. Enough of the professionals. Time for the amateurs to step up.

And don't let the poor lighting fool you on this one, this dish was absolutely amazing and gets major bonus points for taking less than half an hour to make!

Adapted from a Recipes for Health classic from the New York Times, in their infinite wisdom. 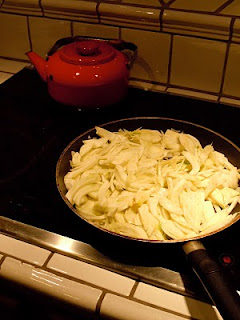 Preheat the oven to 450 degrees F

Trim the stalks and fronds from the fennel, and set them aside. Quarter the bulbs, cut away the cores and slice thin across the grain. You should have about 4 cups sliced fennel.

Chop the fronds, and measure out 1 to 2 tablespoons (to taste).

Heat the olive oil over medium heat in a large, nonstick skillet, and add the onion.

Cook, stirring, until the onion begins to soften, about three minutes.

Add the fennel and a generous pinch of salt.

Cook, stirring often, until the fennel mixture is tender, about 10 minutes.

Add the garlic, stir together and cover the pan.

Turn the heat to low, and continue to cook 5 to 10 more minutes until the mixture is very soft and fragrant.

Stir in the chopped fennel fronds, and remove from the heat. Season to taste with salt and pepper.

Oil a baking dish large enough for the fish to fit in a single layer.

Season the fish with salt and pepper, and arrange in the baking dish.

Cover with the fennel stalks you set aside.

Cover the dish tightly with foil, and place in the oven. Bake 15 minutes. 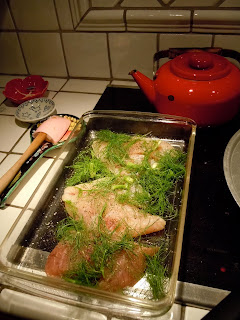 Check the fish; if you can cut into it with a fork, it is done (cod will cook more quickly than halibut). If it is still tough in the middle, cover and return to the oven for five minutes. Remove from the oven and check again. Remove the fennel stalks from the fish and discard.
4. Place the cooked fennel on a platter or on individual plates, top with the fish fillets and serve. 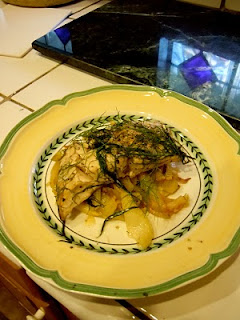 Advance preparation: The cooked fennel will keep for two days in the refrigerator.
Posted by Academically Malnourished at 11:57 PM